US Politics: Trump would savage a humbler foreign policy but Democrats should stand firm 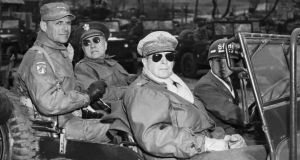 Six years after US Democrats used atomic force to end the second World War, it was permissible, even normal, to question their firmness abroad.

Douglas MacArthur was pressing in 1951 for the expansion of the Korean war into communist China. The general’s bellicosity and indiscretion cost him his command but Harry Truman, the president who cashiered him, emerged the worse.

The idea that absent-minded Democrats had “lost” China was already in the air. Now the right had a martyr to enforce the point.

The loss of an unlosable reputation as the party of security was a defining trauma. It has been renewed at intervals ever since. An untested John F Kennedy was putty in the coarse metalworker’s hands of Nikita Krushchev at their first summit in 1961. George McGovern was trounced as a supposed peacenik in the 1972 election. Jimmy Carter was powerless to free US hostages in Tehran later that decade. John Kerry, like McGovern a war veteran, had his service impugned as he lost the 2004 election.

This history explains why Democrats are hair-trigger sensitive to insinuations of softness. It also explains why a party that is rethinking domestic policy from first principles is doing nothing of the kind in foreign affairs.

Elizabeth Warren would legislate a new wealth tax. Kamala Harris wants a nationwide suspension of capital punishment. Bernie Sanders, yet a third senator with aspirations to the presidency, was calling himself a socialist before it was modish. Almost all the candidates for 2020, including Joe Biden, who leads in the polls, would universalise healthcare, and even South Bend mayor Pete Buttigieg, fluent in French, Norwegian and ambiguity, proposes a new-model supreme court.

More than its human diversity, it is the intellectual confidence of the Democratic field that stands out. Until, that is, president Donald Trump sends a thousand extra troops to a combustible Gulf, or the spat with China promises to run away with itself, or the national security adviser invokes the Monroe Doctrine against hemispheric nuisances.

Then there is a clamming up and a splitting of differences. With the exception of Sanders, Democratic foreign policy seems to offer nothing more dramatic than the status quo ante of 2016, with a bit of extra vigilance towards China. It would have the US re-enter the nuclear pact with Iran and treat democratic allies better than it does strongmen. But the candidates would not revisit its underlying worldview.

At a time when all orthodoxies seem negotiable, the Democrats are allowing many to go unexamined. Should the US continue to aspire to overwhelming military superiority when it accounts for less and less of world output? How much mileage is there in the containment of a country, China, that has had the world’s largest economy for 18 of the past 20 centuries? In a region as fraught as the Middle East, should the US have such clear friends (Israel, Saudi Arabia) and such clear enemies (Iran)? Should it, given its domestic bounties of oil and gas, have much of a role there at all?

More often, Democrats find themselves attacking Trump for insufficient toughness. When the president chases North Korea’s Kim Jong-un around Singapore and Hanoi for a promise to denuclearise, they make sport of his indignity. When he assists the Saudis, they press for a harsher line on the kingdom.

What the party almost never does is make the unabashed case for a more circumscribed foreign policy. The right thing is always to “lead”, to honour US “values”, to be “muscular”. You feel yourself transported to the innocence of the 1990s, minus the unipolarity.

This is not just an intellectual failure. It is a political mistake. Yes, Trump would savage a humbler foreign policy as cowardice. But Democrats should brave the gauntlet. This president was not elected on a platform of brinkmanship in the Gulf. It was the promise of a quieter life that marked him out from other Republicans, and even from Hillary Clinton, who ran to the right of Barack Obama’s foreign policy.

Trump’s failure to enact that mandate has given his enemies an opening they are refusing to take. Perhaps, outside the anti-American fringe left, Democrats still cherish the idea of the US as a redemptive force in the world, which somehow muddled along in the void before 1776. Even if they were not scarred by past elections, they would regard quietism as simply beneath the nation’s dignity.

The candidates for the 2020 election are facing the future on almost every subject. On the one that counts most, they are stranded in time. – Copyright The Financial Times Limited 2019