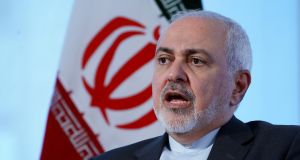 Iran’s foreign minister Mohammad Javad Zarif: “We consider this as part of our rights under the nuclear deal.” Photograph: Carlo Allegri/Reuters

Iran has breached internationally-agreed limits on its enriched uranium stocks in a further blow to a landmark nuclear deal US president Donald Trump abandoned last year.

Mohammad Javad Zarif, Iran’s foreign minister, revealed on Monday that its stockpile of enriched uranium had expanded, a development the International Atomic Energy Agency later said it had investigated and confirmed.

In May, Iran’s president Hassan Rouhani said Iran would exceed limits on the nuclear deal within 60 days unless the remaining signatories to the nuclear deal took steps to counter the impact of American sanctions. That deadline expires on July 7th.

The development on Monday ratchets up the brinkmanship between Tehran and Washington and leaves France, Germany and the UK struggling to save the accord amid security fears in the Gulf region.

One European diplomat admitted it was becoming “increasingly difficult” to sustain the 2015 accord, which offered Iran relief from many international sanctions in exchange for accepting curbs on its nuclear programme.

Iran has insisted it wants to keep the pact alive, but it has demanded the remaining signatories provide more economic support. Another European diplomat said the move was expected, saying it was “regrettable but reversable”.

Jon Alterman, Middle East director at the Center for Strategic and International Studies, said the breach by the Iranians was “intended to be alarming”, but was “not surprising”.

“I don’t see how the US has much standing to complain about Iran not abiding by any agreement the US has said is deeply flawed and walked away from,” said Mr Alterman.

Mr Zarif told reporters on the sidelines of a mourning ceremony that Iran had “surpassed” a 300kg limit on its stockpile of uranium enriched to a low level, a breach Iran had threatened in a package of measures announced on May 8th.

“We consider this as part of our rights under the nuclear deal,” Mr Zarif said. But he did not reveal the size of Iran’s enlarged uranium stockpile.

Iran has previously warned that it may take a more provocative step by busting curbs on the enrichment levels. The nuclear agreement allows Iran to enrich uranium up to a purity of 3.67 per cent, but officials have said they could start enriching it up to 20 per cent, which would hasten Tehran’s ability to reach weapons-grade levels of 90 per cent.

The agreement is not a legally binding treaty, but if Iran were to continue accelerating its atomic activity the European signatories Germany, France and the UK – known as the E3 – would face a dilemma. They would have to choose whether to support the agreement in the hope of keeping it alive, or trigger a “dispute mechanism” that could lead to the revival of UN sanctions and the deal’s collapse.

Mr Zarif said the deal allowed Iran to stop implementing parts of its commitments when other signatories failed to deliver on its promised economic dividends.

Tehran previously justified its move to increase its inventory after Mr Trump in April refused to renew waivers on sanctions that stop transferring its enriched uranium to other countries.

The three European states last week launched a long-awaited payments channel to buoy EU-Iran trade in the face of US sanctions. But Mr Zarif said the channel, known as Instex, was “not sufficient”.

“So, the Islamic republic of Iran will carry on with its plans [for deal limit breaches] according to the timetable announced before,” he said.

Breaching the 300kg limit would begin to take away the “breathing space” created by the deal, said Suzanne Maloney, an Iran expert at the Brookings Institution.

“This particular move in and of itself doesn’t manifestly change Iran’s breakout timeline. It doesn’t put Iran much closer to nuclear capability.”

Iran’s move follows weeks of rising tensions between Tehran and Washington. Iran has denied US claims that it is responsible for spate of attacks on oil tankers around the Strait of Hormuz. – Copyright The Financial Times Limited 2019