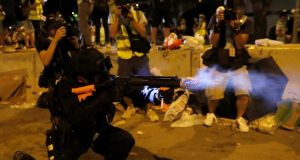 A police officer fires a baton round outside the legislative council building in Hong Kong. Photograph: Tyrone Siu/Reuters 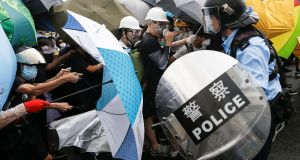 Police try to disperse protesters near a flag raising ceremony for the anniversary of Hong Kong handover to China in Hong Kong on July 1st. Photograph: Thomas Peter/Reuters 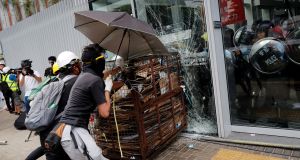 Protesters try to break into the Legislative Council building where riot police are seen, during the anniversary of Hong Kong’s handover to China in Hong Kong. Photograph: Tyrone Siu/Reuters 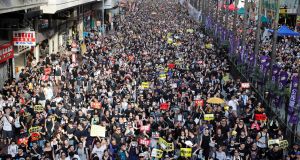 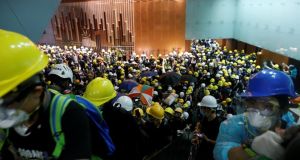 Protesters break into the legislative council building during the anniversary of Hong Kong’s handover to China in Hong Kong on Monday. Photograph: Reuters/Stringer 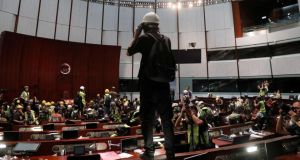 A protester stands on a desk inside a chamber after they broke into the legislative council building during the anniversary of Hong Kong’s handover to China in Hong Kong on Monday. Photograph: Reuters/Tyrone Siu 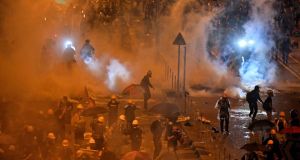 Police fire tear gas at protesters near the government headquarters in Hong Kong. Riot police fired as they charged anti-government protesters in the early hours of the morning of July 2nd (local time). Photograph: Anthony Wallace/AFP/Getty

Riot police deployed tear gas to disperse protesters who stormed Hong Kong’s legislature on Monday in a day of unprecedented chaos and violence on the 22nd anniversary of its return to China.

Demonstrators angry at a proposed law that could see people in Hong Kong extradited to mainland China besieged the legislative council building for several hours before smashing their way into the building and vandalising the city’s political heart.

In scenes of anarchy, hundreds of protesters occupied the chamber for three hours, where they sprayed graffiti on the walls, smashed portraits and defaced the city’s emblem.

They hung a black sign up in the chamber which read, “There is no way left”.

Hundreds of police were inside the legislature when the siege began but disappeared as soon as the protesters rammed their way through reinforced panes of glass, much to the anger of pro-democracy lawmakers, who say it was a tactical retreat designed to portray the demonstrators in a negative light.

Martin Lee, founder of the Democratic Party, said the police watched the protesters try to break through the doors for four hours “and as soon as they did, they just disappeared. It was a trap to make them look like rioters and hooligans.”

The small group of aggressive protesters could easily have been cleared by police before they broke through the doors, according to Labour Party lawmaker Fernando Cheung.

“I’m sorry that people took the bait,” he told reporters. “The police wanted this to happen, they wanted the public to see this.”

The violent actions were in stark contrast to the estimated 550,000 people who participated in a peaceful march from Victoria Park to a park by the legislature on Monday to mark July 1st, the date Britain handed control of Hong Kong back to China.

After a few hours in the legislature, the protesters were filmed by TV crews arguing among themselves about whether they should leave or try to occupy the building all night. They finally agreed to leave at midnight soon after police announced they would begin clearing the building and warned they would use “appropriate force” if they encountered resistance.

Shortly after midnight hundreds of police in riot gear took over the junctions around the legislative council and fired tear gas as they ran towards the building to disperse the remaining protesters and clear the area.

Beijing’s Communist Party-run media condemned the protests in Hong Kong and said they were on an “evil path”, had crossed a red line and “should be punished according to the law”.

“The central government should enforce the law firmly and quickly put down the riot. Otherwise, the continuing turmoil will seriously jeopardise Hong Kong,” the Global Times said. “It is a red line that absolutely cannot be crossed.”

Anger among protesters boiled over on Monday, with tensions already running high shortly after dawn at the annual flag-raising ceremony. The deteriorating security situation forced the scaling down of the ceremony, and officials moved the dignitaries inside an exhibition centre for the first time in the event’s history, citing possible bad weather.

While the flags were raised outside and helicopters flew by carrying a Chinese and Hong Kong flag over the harbour, the city’s chief executive Carrie Lam and the ceremony guests watched the proceedings on a screen inside.

Shortly before the ceremony was due to begin police used riot shields and pepper spray to push back hundreds of helmeted protesters with umbrellas who tried to advance down barricaded streets toward the exhibition centre. Police later issued a statement saying the protesters had iron poles and bricks and had thrown an “unidentified liquid” requiring 13 police officers to get medical attention. Several protesters were also injured in the clashes.

The downsized ceremony marking the handover was a muted affair and in a short speech Mrs Lam struck a conciliatory tone saying she would learn lessons from the ordeal and be “more responsive to the aspirations, sentiments and opinions of the community”.

Later in the day, as it became clear some protesters were intent on storming the legislature, the organisers of the Civil Human Rights Front urged Mrs Lam to come and meet the students and discuss their demands but she declined, they said.

“We cannot be angrier at the rejection of the request, which proves her ‘willingness to listen’ to be the ugliest political lie,” the group said in a statement released on Monday night, adding her “arrogance . . . has only poured fuel to the flames, and led to the crisis today. Lam is the culprit.”

Monday was also the 98th anniversary of the founding of the Communist Party of China, and the past month of turmoil in Hong Kong has handed the party’s leader Xi Jinping his greatest political challenge since he came to power seven years ago.

Protesters want Ms Lam to step down immediately, the Bill to be fully withdrawn, and are calling for an independent investigation into the police’s use of force at a June 12th rally. The police, who used rubber bullets, pepper spray and batons against the protesters on that day, say their response was justified, but they have adopted softer tactics since.

The controversy over the Bill has lent momentum to the pro-democracy movement and crystallised concerns that freedoms pledged under the “one country, two systems” framework when Britain handed back control of Hong Kong to China are being steadily eroded.

Pro-democracy lawmaker Claudia Mo said that the protesters were feeling desperate and angry. “The young people feel like they have nothing to lose,” she said. “This government has simply not listened to the people. The young are very determined, they are not going budge.”