Macron says there were ‘too many hidden agendas’

Leo Varadkar has said that "the vast majority of EPP prime ministers don’t believe that we should give up the presidency quite so easily, without a fight." Video: European Parliament 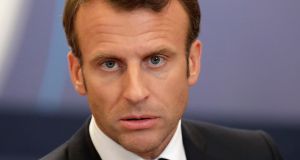 An evening of last minute horse-trading and furious deal-making is in store in Brussels after an all-night meeting of EU leaders broke up without agreement on Monday on a deal to allocate the EU’s top jobs for the next five years.

The 28 leaders have retired for a few hours rest and will convene again on Tuesday at 11 am. However the outgoing president of the Council of EU leaders Donald Tusk will attempt to broker a compromise through a series of contacts this evening.

Taoiseach Leo Varadkar, whose name was touted as a possible compromise candidate for the Presidency of the European Commission last night, is remaining in Brussels on Monday night and Tuesday morning’s scheduled Cabinet meeting has been postponed. Tánaiste Simon Coveney, who is in Moscow, is also away.

Mr Varadkar has ruled himself out of consideration for the Commission job.

One source in Brussels said that the leaders, several of whom had travelled from a G20 meeting in Japan to attend the emergency EU summit, had been given a few hours to rest after talks throughout the night proved inconclusive. “They met, adjourned, met again and then adjourned again,” said one Irish source in Brussels.

The EU leaders are seeking to agree a slate of candidates to fill all the bloc’s top jobs for the next five years. They are pressed for time because the new European Parliament meets for the first time, after recent elections, in Strasbourg on Tuesday. One of the jobs to be agreed by the leaders - and the heads of the EU’s party groupings - is the president of the Parliament, due to be voted in by MEPs this week.

However, most of a disagreement surrounds the Presidency of the European Commission, the EU’s civil service and policy engine. Both the leading candidates of the centre-right European People’s Party and the Socialist group, Manfred Weber and Franz Timmermans, have been rejected by the leaders.

Council head Donald Tusk is seeking to engineer a deal which fills all the jobs, which also include the next head of the European Central Bank, his own job heading the Council of EU leaders and the EU’s foreign policy chief’s role, in one grand bargain. However, all the proposals so far have been blocked by various groups and countries.

Earlier his morning the French President Emmanuel Macron voiced his frustration at the stalemate. Speaking to reporters after emerging from the summit, saying that the EU could not be a club that meets “without ever deciding anything”

“What was lacking around the table was the spirit and determination to defend the general European interest. There were too many hidden agendas,” he said.

Eastern European countries had strongly objected to a deal hatched by Mr Macron and the leaders of Germany and Spain to hand the European Commission presidency to Dutch socialist Mr Timmermans.

Mr Timmermans’ nomination was also deeply unpopular with the centre-right European People’s Party (EPP) group in the European Parliament, which argued it should hold the Commission presidency as it has the most lawmakers in parliament.

It is highly unusual for summit talks to run into a third day, and the current negotiations mark what is already the third attempt to fill the posts for at least the next five years.

German Chancellor Angela Merkel, whose Christian Democrat party belongs to the EPP grouping, was more conciliatory towards the eastern nations, saying the EU’s larger members could not ignore the views of its smaller nations.

Diplomats said getting names agreed was crucial for the EU’s standing, as more delays would only provide fodder for anti-establishment nationalists who say the bloc is out of touch with its citizens, divided and dysfunctional. - additional reporting Reuters.

1 Coronavirus: 396 more cases as public is urged to help protect ‘older and vulnerable’
2 The Sack of Balbriggan: The burning of a town that shocked the world 100 years ago
3 The FinCEN files: The billion dollar a month money trail
4 Lockdown measures and rising anger in Madrid as Covid takes hold again
5 Coronavirus: Public health experts considered idea of moving Dublin to Level 4
Real news has value SUBSCRIBE