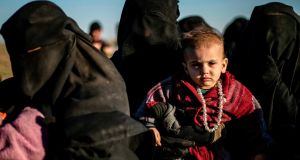 Women and children wait to be searched by members of the Kurdish-led Syrian Democratic Forces after leaving the Islamic State terror group’s last holdout in Baghouz, in eastern Syria. Photograph: Delil Souleiman/AFP/Getty Images

Hundreds more people have left the last area held by the Islamic State terror group in eastern Syria and gathered in a massive reception area to be searched and screened by US-backed fighters.

Some of those who gathered outside the village of Baghouz said they had been waiting since the previous night when hundreds left the pocket held by Islamic State, also known as Isis.

The latest wave of evacuations brings closer the final defeat of the extremists’ so-called “caliphate” at the hands of the Kurdish-led Syrian Democratic Forces. Officers from the US-led coalition were screening the men who left the Islammic State-held area to determine if they were militants or civilians.

The exodus came three days after the US-backed forces resumed their push on militants holed up in Baghouz on the banks of the Euphrates River, close to the Iraqi border. In the past few weeks, thousands of civilians left the speck of territory in organised evacuations following an earlier halt in fighting.

The Kurdish-led forces said their fighters were surprised by the large number of civilians, including Islanic State family members, cooped up in the tiny area squeezed smaller and smaller by intermittent offensives.

The US-backed forces slowed their push on Baghouz last week to allow civilians to leave the tiny enclave. Asked about the situation inside Baghouz, a Russian woman who came out with her three children responded in broken Arabic: “Fear.” She said her husband had died.

Another woman in her mid-20s, who identified herself as Reem, from the central Syrian province of Hama, said she was waiting for her husband to come out of an Islamic State-controlled jail. He had been there for months after killing an Islamic State member in retaliation “for his baby daughter being killed in an air strike”, she said.

“I haven’t seen him since and don’t know where he is,” Reem said, adding that she had asked repeatedly for his whereabouts before deciding to leave.

The evacuees said the bombing was intense over the past few days. One woman said she saw a man hit by a missile as she was escaping from one tent to another. Another woman said many were waiting to leave and that the scene was chaotic at the safe passage area.

Earlier on Tuesday, SDF spokesman Mustafa Bali, said about 3,000 people had come out of Baghouz on Monday. They left through a humanitarian corridor established by Kurdish-led forces for those who wanted to leave or surrender.

Since February 20th, more than 10,000 people have left the Islamic State pocket, often in dramatic scenes of black-robed women with children in the back of trucks passing through the corridor and heading into the desert. They were then whisked off to a camp for displaced people to the north, while suspected Islamic State fighters were moved to detention facilities.

Retaking the last Islamic State-held enclave in Baghouz would be a milestone in the devastating four-year campaign to end the group’s self-proclaimed caliphate that once covered a vast territory straddling Syria and Iraq. Mr Bali said a large number among those who left on Monday were Islamic State fighters who had “surrendered to our forces”.

It is unclear how many Islamic State militants and civilians remain inside, but the number is thought to be in the hundreds. – AP

1 One hundred Irish retailers for all your online Christmas shopping
2 Miriam Lord: All test and no trace makes Jack and Heaven knows who else, a very ill boy
3 Des Bishop apologises to Traveller community for comments in interview
4 Varadkar says ‘dumping’ contact tracing problem on GPs ‘unfair’
5 Gym owner plans to defy restrictions and open
Real news has value SUBSCRIBE