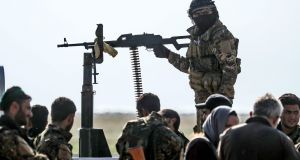 Fighters with the US-backed Syrian Democratic Forces gather at a scanning area for people evacuated from Baghouz. Photograph: Getty Images

Islamic State is verging on final territorial defeat after the US-backed Syrian Defence Force (SDF) said on Saturday it is squeezing their last bastion in a pincer movement near the Iraqi border.

The fall of Baghouz would mark a milestone in a global campaign against Isis but the Islamist group remains a threat, having resorted to guerrilla tactics. The final thrust of this assault caps a four-year campaign to vanquish the group.

Thousands of Isis fighters, followers and civilians, who had retreated to Baghouz have poured out of the tiny cluster of hamlets and farmlands in Deir al-Zor province over the last few weeks. Their evacuation delayed the final assault until Friday evening when the SDF said it had advanced and would not stop until the jihadists were defeated.

“We expect it to be over soon,” said spokesman Mustafa Bali. He said the advance was happening on two fronts using medium and heavy weaponry. Isis has responded with drones and rockets from the several hundred diehards, mostly foreigners, holding out in Baghouz.

The advance was slowed for several weeks by Isis’s extensive use of tunnels and human shields. There is a strong possibility that militants have slipped out, hidden among civilians.

On Friday columns of smoke could be seen rising from Baghouz as attack aircraft circled above. A spokesman for the coalition, which supports the Kurdish-led SDF, characterised the final battle as a “complicated situation with many variables”. Such fluid engagements have been a hallmark of encounters between Isis and the SDF coalition over the years, especially in close-quarter battles such as those in tightly packed neighbourhoods.

The SDF commander-in-chief said on Thursday that his force would declare victory within a week. But he was later contradicted by US president Donald Trump who said the force had retaken 100 per cent of the territory once held by Isis.

Washington has about 2,000 troops in Syria, mainly to support the SDF in fighting Isis. Mr Trump announced in December he would withdraw all of them but the White House partially reversed itself last month, saying some 400 would stay.

About 40,000 people bearing various nationalities have left the jihadists’ diminishing territory in the last three months. Moreover, the number of evacuees streaming out of Baghouz surpassed initial estimates of how many were inside. Reports indicate that many of the people leaving the enclave had been sheltering underground in caves and tunnels.

A 27-year-old Indonesian widow who emerged on Friday said she would have liked to stay in Isis territory but conceded that conditions had become untenable. “I have no money, I have no food for my baby, no medicine, nothing for my baby, so I must go out,” she said.

Meanwhile, in Syria’s Idlib province on Saturday 10 Isis fighters were summarily executed by Tahrir al-Sham, according to Ebaa News Agency, a news outlet that supports the rival jihadist alliance.

Ebaa said the executions were in response to an Isis suicide bomb attack at a restaurant in Idlib a day earlier.

Isis and the groups that comprise Tahrir al-Sham, including al-Qaeda’s former affiliate the Nusra Front, have opposed each other for years. Isis has lost almost all of its territory to the Syrian army, backed by Russia, Iran and Shia Muslim militias in conjunction with a campaign by Kurdish and Arab groups in the north supported by the United States.

Ebaa quoted Anis al-Shami, a security official from Tahrir al-Sham, as saying the executions “today at the scene of the crime are fair punishment which might deter them and wake them from their stupor”.

It published images showing masked gunmen in fatigues firing handguns at the heads of 10 bearded men who sat in front of them on the pavement. The agency’s report could not be independently verified.

Tahrir al-Sham is the main jihadist group in northwest Syria, with a large armed presence throughout Idlib including along the Turkish border.

Elsewhere Isis said on Saturday it had killed 10 Nigerian soldiers in an attack on February 28th at Tdmari village in the country’s northeastern Borno state.

The claim was issued through its news agency, Amaq. Islamic State in West Africa, which split from Islamist group Boko Haram in 2016, has carried out a string of attacks in northeast Nigeria in the last few months. – Reuters