Bombs sent to London airports and Waterloo came from Ireland

No one injured after improvised devices sent to transport hubs in ‘linked series’, say police 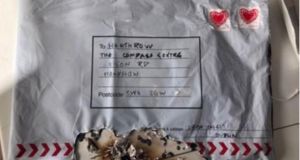 The three incendiary devices, contained in Jiffy bags inside A4-sized envelopes bearing Irish stamps and postmarks, were found on Tuesday morning at the head offices of Heathrow and London City airports and the post room at Waterloo station.

The Metropolitan Police said it was treating the incidents as linked but had an open mind about the motive behind them.

“The packages – all A4-sized white postal bags containing yellow Jiffy bags - have been assessed by specialist officers to be small improvised explosive devices. These devices, at this early stage of the investigation, appear capable of igniting an initially small fire when opened,” a spokesman said.

Shortly before 10am, police received a report of a suspicious package at The Compass Centre near Heathrow, which houses offices for the airport.

“The package was opened by staff at the building, causing the device to initiate. This resulted in part of the package burning. No one was injured. The building was evacuated as a precaution. Specialist officers attended and made the device safe,” a Met spokesman said.

At 11.40am British Transport Police were called to Waterloo Station following reports of a suspicious package in the post room.

The package was not opened, specialist officers made the device safe and no one was injured.

Thirty minutes later, police were called to City Aviation House near London City airport where another suspicious package was found.

“Staff were evacuated from the building as a precaution. The package was not opened and no one was injured. Specialist officers attended and made safe the device,” the police spokesman said.

Each of the packages bore Irish stamps with the words Love and Eire below an image of a heart and were addressed by hand and posted in Ireland.

Gardaí were assisting with the investigation but British police declined to speculate on the possibility that the devices were sent by dissident Republicans.

The jiffy bag reportedly sent to Waterloo appears to have its sender’s address as Bus Éireann, Dublin, but the operator said police had not been in touch.

“Bus Éireann are currently not aware of this and we have no further comment,” a spokeswoman said.

The incidents caused little disruption, although DLR services from London City airport were suspended for a few hours.

“While transport services continue to operate as normal, I urge all Londoners and visitors to our city to remain vigilant, and report any potential suspicious packages to the police,” London mayor Sadiq Khan said.

London suffered four serious terrorist attacks in 2017, including one on London Bridge that killed 11 people, one at Westminster that killed six and one at Finsbury Park mosque that killed one man.

Royal Mail on Tuesday sought to reassure customers and staff that security precautions were robust.

“We are doing everything we can to support the police with their investigation and to ensure the safety and security of our people as they deliver the mail to communities across the UK. Royal Mail has rigorous procedures in place to deal with suspect devices and trained personnel who manage these situations. All our employees are regularly briefed on these types of issues,” a spokesperson said.