The CIA have released 470,000 files that were found on Osama bin Laden's computer after his death in 2011, among them are video files showing the first known images of his son and potential successor, Hamza, as an adult. Video: CIA 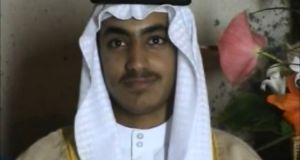 US says the reward will help locating Hamza bin Laden in any country as part its “rewards for justice” programme.

The US government is offering one million US dollars (€879, 700) for help tracking down the son of the late terrorist leader Osama bin Laden.

A state department notice says the reward will be paid for help locating Hamza bin Laden in any country as part its “rewards for justice” programme.

The announcement says bin Laden’s son has emerged as a leader of the al Qaeda terrorist group.

His father was killed in a US military raid in Pakistan in May 2011.

He has released audio and video messages calling for attacks against the US and its allies.

Al Qaeda was responsible for the 9/11 terrorist attacks in the US and other actions. - AP