British Labour ‘would impose whip’ to back second Brexit referendum 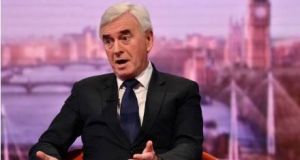 British Labour’s shadow chancellor John McDonnell has said it would be common practice to see MPs whipped to support party policy, but said he understood the difficulties such a decision could pose for MPs in pro-Leave constituencies. File photograph: Getty Images

Britain’s Labour party will whip its MPs to back a second Brexit referendum rather than offer a free vote, its shadow chancellor John McDonnell, has said.

It is a move senior Labour backbencher Caroline Flint warned could lead to the rebellion of up to 60 MPs.

Mr McDonnell said it would be common practice to see MPs whipped to support party policy, but said he understood the difficulties such a decision could pose for MPs in pro-Leave constituencies.

“Normally we will whip and that will be decided in the normal way by the chief whip and the shadow cabinet and the party overall,” he told Sky News’s Sophy Ridge on Sunday.

“I think on an issue as this we would see a whip but also you’ve got to respect people’s views and their constituency interests as well, and the whipping arrangement will be determined in discussion in due course.”

Meanwhile, a group of Brexit-backing politicians who rejected British prime minister Theresa May’s exit deal in January have set out the changes they want to see to her agreement in return for their support.

The Sunday Times said a group including former Brexit minister Dominic Raab and deputy DUP leader Nigel Dodds, whose party props up Mrs May’s minority government, had drawn up the tests by which they would assess any changes.

“The mechanism has got to be legally binding, so effectively treaty-level change,” one of the group, Conservative Michael Tomlinson, said in an interview with the newspaper.

It comes after Jacob Rees-Mogg, the leader of a pro-Brexit faction in Mrs May’s Conservatives which set up the group, this week scaled back his opposition to her deal saying he would no longer insist that the backstop be removed.

The shadow chancellor, Mr McDonnell, said Labour would “never be forgiven in the future” if it allowed a Brexit deal or no-deal exit to damage people’s jobs and the long-term future of the economy.

A number of Labour frontbenchers have publicly opposed a second referendum, including the shadow housing minister, Melanie Onn, and the shadow justice minister, Gloria De Piero.

Ms Flint urged McDonnell and the Labour leadership to allow a free vote and said she hoped Labour colleagues would vote for an improved Brexit deal including one with new promises on workers’ rights that she and other Labour MPs had been working to secure.

“Myself and so many Labour MPs in the general election 2017 made a promise to respect the outcome of the referendum, and that was Labour’s policy,” she said.

“So my appeal, to Jeremy Corbyn, John McDonnell, to Keir Starmer, is to allow MPs a free vote on an improved deal, so those who want a second referendum can vote for that but those of us who want to keep our promises to our electorate can also keep faith with those people.”

Mr McDonnell said discussions would take place in the shadow cabinet about what kind of amendment for a fresh public vote the party could support – and that frontbenchers would be expected to support it.

Asked whether he believed he was damaging Labour’s electoral prospects, Mr McDonnell said: “It may well be but we’ve got to be honest with people – people have had enough of politicians who say one thing and actually do another.”

The shadow business secretary, Rebecca Long-Bailey, echoed some of Ms Flint’s concerns and insisted the party would not stop pushing its own version of a Brexit deal or the possibility of a general election, saying she “truly hopes” the party is not forced into backing a second referendum.

“We have got to leave all options on the table to avoid an economic catastrophe for Britain,” she told the BBC’s The Andrew Marr Show. “We are not looking to overturn the result of the referendum.”

She said parliament should provide a number of credible options to voters, including a Labour Brexit deal and a Norway-style deal that would keep the UK in the single market and customs union.

However, Long-Bailey insisted a referendum was still not the priority for the party. “That’s not the point we should be moving towards, we need a deal that will pass parliament and secure economic protection for people,” she said.

Ms Long-Bailey said she understood Flint’s position against a referendum. “I’ve always voiced my own reservations about having a second referendum – but we can’t put Britain into an economic catastrophe,” she said.

Former Labour prime minister Tony Blair said Labour MPs who were uneasy about a second referendum should push for an extension in order to gauge the public mood.

“I think you’ll get to another referendum when people understand that a hard Brexit is going to be deeply economically painful for the country, and a soft Brexit means we just become a rule-taker,” he said.

“It’s in those circumstances that I think you mobilise a majority in parliament to say the sensible thing in these circumstances is to put it back to the people, or pass her deal, subject to a confirmatory referendum.”

With Britain due to leave the bloc on March 29th, Mrs May is still seeking assurances on the backstop arrangement aimed at preventing a return to hard border controls in Ireland.

Concerns over the backstop led to parliament overwhelmingly rejecting Mrs May’s deal in January, with critics saying it could leave the country tied to EU rules indefinitely.

If Mrs May secures the demands, she would win the backing of the DUP and many Brexit-supporting politicians in a vote on the deal promised by March 12th, the Times said.

“They have made it very clear that if the effect of any change is to get the guarantees on the Irish backstop that they sought, then that would be sufficient, rather than demanding that it has to be done by one mechanism or another,” trade minister Liam Fox told BBC TV on Sunday.

EU chief negotiator Michel Barnier said on Friday the bloc was ready to give Britain more guarantees that the backstop was only intended to be temporary and used for a “worst-case scenario”.

In a further sign that former opponents of Mrs May’s deal might now back a revised version, Graham Brady, a senior Conservative, said he would support it with legally binding assurances on the backstop.

“Once we have that, my colleagues in parliament need to recognise the strength of feeling,” he wrote in the Mail on Sunday newspaper. – Guardian, Reuters