French president warns against the trap of ‘national entrenchment’ 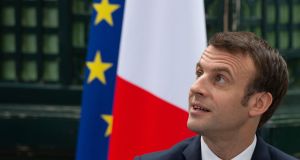 French president Emmanuel Macron: Brexit “symbolises the crisis of Europe”, he argues in his letter. He indirectly accuses Brexiteers of irresponsibility and lying. Photograph: Caroline Blumberg/AFP/Getty

An urgent appeal for the people of Europe to mobilse for “the values of progress” and against “nationalists without solutions” has been issued by the French president, Emmanuel Macron.

In an unprecedented open letter published in Ireland by The Irish Times and by newspapers in the other 27 EU member states, including Britain, Mr Macron says that two traps threaten Europe today – the trap of “nationalist retrenchment” and “the trap of the status quo and resignation”.

The French president chose this moment to issue his appeal, an aide said, because the UK is scheduled to leave the European Union in three weeks and elections to the European Parliament take place in May.

Brexit “symbolises the crisis of Europe”, Mr Macron argues in his letter. He indirectly accuses Brexiteers of irresponsibility and lying.

“Who told the British people the truth about their post-Brexit future?,” he asks. “Who spoke to them about losing access to the European market? Who mentioned the risks to peace in Ireland of restoring the former border? Nationalist retrenchment offers nothing; it is rejection without an alternative.”

The EU has been a historic success, Mr Macron says. Collective sovereignty is real; the isolationist sovereignty of the nationalists is an illusion. Only the EU can face up to aggressive policies on the part of China, Russia and the US. Only the EU can contain the power of the internet giants. The euro strengthened Europe in the last financial crisis, he says.

Mr Macron recognises that the EU “has become a soulless market” in the eyes of many citizens. He wants them to see Europe as “borders that protect and values that unite”. Withdrawing from Europe does not defend identity, he says. “It is the European civilisation that unites, frees and protects us.”

The present is “a pivotal moment ... the moment for European renewal,” Mr Macron writes, calling on Europe to renew itself around the three ambitions of freedom, protection and progress.

The 2016 presidential campaign in the US and the French presidential campaign in 2017 were marked by accusations of Russian interference. Mr Macron proposes a European agency for the protection of democracies to prevent cyber attacks and manipulation. He would also ban foreign powers from funding European political parties, and ban all incitements to hatred and violence on the internet.

Mr Macron addresses concerns about the influx of migrants in Europe by proposing a “rethink” of the Schengen area. Ireland does not belong to the Schengen zone, but those who do must guarantee stringent border controls and adopt a single asylum policy with the same acceptance and refusal rules, he says. He calls for a common border force, a European asylum office and a European council for internal security.

Without naming China, Mr Macron says the EU must no longer “suffer in silence” from unfair competition. He advocates penalties or a ban on companies “that compromise our strategic interests and fundamental values” and proposes a “European preference” in strategic industries and public procurement, similar to what is practised in China and the US.

Doubtless influenced by his experience of the revolt of the yellow vests or ‘gilets jaunes’, Mr Macron says that European social policies must converge, not compete with each other. He wants a “social shield” for all workers in the EU, which would guarantee the same pay in the same workplace and “a minimum European wage appropriate to each country and discussed collectively each year”.

Mr Macron wants member states to hold a conference that would engage with citizens’ panels. An adviser said the French president had been impressed by the efficacy of the Citizens’ Assembly in addressing fundamental questions in Ireland.