Families call for ‘Beatles’ Isis fighters to be put on trial 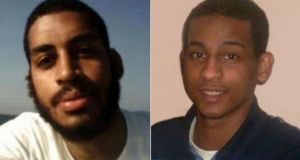 Relatives of the victims of an Islamic State torture and murder cell known as “the Beatles” have expressed relief that the two remaining members have been captured and said they wanted to see them stand trial.

The two men were thought to have been trying to escape from the country following the collapse there of Islamic State, also known as Isis, and have since been questioned by both Kurdish fighters and the US military.

One other member of the cell, Mohammed Emwazi, known as “Jihadi John”, was killed in an air strike in 2015. The fourth alleged member, Aine Davis, is serving a 7½-year jail sentence in Turkey, imposed last year for membership of a terrorist organisation.

The group’s hostages nicknamed them the Beatles because of their British accents. Davis has denied he was one of the four.

In formally designating the two captured men as terrorists last year, the US State Department said they were members of a four-strong Islamic State “execution cell” which was responsible for holding captive and beheading more than 27 hostages and torturing many more.

“As a guard for the cell, Kotey likely engaged in the group’s executions and exceptionally cruel torture methods, including electronic shock and waterboarding,” the department said. “Kotey has also acted as an Isil recruiter and is responsible for recruiting several UK nationals to join the terrorist organisation.

“Elsheikh was said to have earned a reputation for waterboarding, mock executions, and crucifixions while serving as an Isis jailer.”

Their victims included the British aid workers David Haines and Alan Henning, the US journalists James Foley and Steven Sotloff, and the American aid worker Peter Kassig. A number of the murders were filmed, and videos were posted on the internet in 2014.

Since the capture of the two men, officials in London and Washington have been considering how they should be brought to justice.

James Foley’s mother Diane said she hoped the two men would be put on trial and imprisoned for the rest of their lives. “I’d like them to be brought to trial in the US, but as long as they’re brought to fair trial and detained and justice is served I would be most grateful.

“Their crimes are beyond imagination. They really have not done anything good in the world, so I think they need to spend the rest of their life being held.”

David Haines’s daughter Bethany said: “In my opinion, they shouldn’t be breathing but that’s not really a realistic kind of expectation. I think that they should be locked up with the key thrown away and never to be released.”

“I will be extremely frustrated if they were not offered a fair trial. The worst thing we can do with a terrorist is to deprive him from his right because then you make the terrorist a victim and if you victimise someone then you just fuel his narrative and you just confirm his narrative.”

However, there are questions about whether or not the two men still retain British nationality. One US official told the New York Times that the British government had revoked both men’s British citizenship. The Guardian understands that this is correct.

British home secretaries have the power to do this if they are satisfied it would be “conducive to the public good”.

Elsheikh moved to the UK from Sudan with his family in the 1990s, while Kotey has a Ghanaian and Cypriot background.

Lord MacDonald, director of public prosecutions from 2003 to 2008, said that regardless of whether they have been stripped of their citizenship, the men could still be tried in the UK for kidnap and torture under the universal jurisdiction principle. “There is a mountain of evidence for kidnap and torture,” MacDonald said.

British government ministers may be content for the two men to stand trial in the US, but would be reluctant to see them consigned to Guantánamo Bay, fearing this could lead to renewed protests about the US detention facility.

A British Foreign Office spokesperson said: “The UK government’s long-standing position is that the detention facility at Guantanamo Bay should close. We continue to engage with the US government on this issue, as we do on a range of national security issues.”

American officials told the New York Times that the two men were captured by the Kurdish-led Syrian Democratic Forces, which were fighting the last remaining pockets of Islamic State fighters near the Euphrates river on the Iraq-Syria border. They are said to have been identified by fingerprints and other biometric tests.

They are thought to have been questioned about the whereabouts of John Cantlie, the British journalist taken hostage by Islamic State. He appeared in a number of Isis propaganda films, but has not been seen since a film that was posted online in December 2016.

Like Emwazi and Davis, Kotey and Elsheikh grew up in west London, where Elsheikh worked as a car mechanic. They are understood to have initially joined al-Qaeda in Syria before transferring their allegiance to Islamic State.

Relatives of the pair said they did not wish to comment on their capture.