Facts of Brexit become more insistent by the week

London Letter: Whitehall is loud with chatter about customs arrangements and partnerships 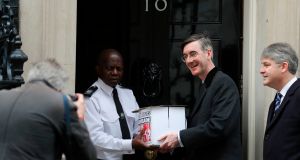 Jacob Rees-Mogg was in Downing Street on Thursday to deliver a petition on behalf of Daily Express readers who want to cut the international aid budget. The favourite among Conservative activists to succeed Theresa May told Sky News that he “wouldn’t dream of being so presumptuous” as to measure the curtains.

He did, however, hold forth on what he saw as the glittering opportunities for trade after Brexit, promising that a Toyota made in Japan would be subject to lower tariffs in Britain than a Peugeot “that probably won’t work”. He might have picked on a different European carmaker, in view of the fact that Peugeot now owns Vauxhall, with two factories in Britain.

Besides, the parts that come into Britain from Europe to make Japanese cars will be subject to whatever customs arrangements are agreed with the EU. And the EU and Japan are well advanced in negotiations about a trade deal that Britain will hope to piggy-back upon until it gets around to negotiating new, post-Brexit trade deals of its own.

The task of finding new trade opportunities falls to the Department of International Trade (DIT), which was set up after Brexit, along with the Department for Exiting the European Union (Dexeu). This Cinderella department, headed by arch-Brexiteer Liam Fox, receives much less attention than Dexeu, which runs the Brexit negotiations.

An air of unreality surrounds the department’s work, not least because nobody can be sure that it will ever get around to negotiating a single trade deal

The department boasts a logo featuring the lion and unicorn above a three-masted sailing ship, a reminder of Britain’s glorious past as a maritime trading nation, perhaps, or a metaphor for Brexit as a backward glance.

Out of sight, DIT has grown from just 50 trade experts to 450, a quarter of whom have experience in trade negotiations. Crawford Falconer, an experienced trade negotiator from New Zealand, is chief trade negotiation adviser. Fox has appointed the first of nine trade commissioners to promote British trade in different parts of the world, an initiative which is unpopular in the Foreign Office.

There are 14 trade working groups scoping out possible future trade deals with countries outside the EU and Britain will present its own trade schedules to the World Trade Organisation later this year for the first time in decades.

Despite all this activity, an air of unreality surrounds the department’s work, not least because nobody can be sure that it will ever get around to negotiating a single trade deal. May repeated this week that Britain will leave the customs union when it leaves the EU and that it wishes to be free to strike independent trade deals around the world.

As negotiations with the EU enter their final months, however, Whitehall is loud with chatter about customs arrangements and partnerships, a customs union for goods only, and various ways of remaining aligned with the EU. Such talk is anathema to hard Brexiteers, who insist that Brexit is a glorious opportunity to be seized rather than a tiresome problem to be managed.

But the facts become more insistent as each week brings more evidence of the likely cost of leaving the customs union and the single market. A report this week from the UK Trade Policy Observatory at the University of Sussex found that Brexit could boost British manufacturers of basic goods such as food, which would benefit if high tariffs were imposed on such imports from the EU.

These gains would do little to offset the damage to Britain’s high-tech manufacturers, including the pharmaceutical and motor industries, which would see their products become much more expensive for consumers in the EU. The report found that, even if Britain negotiates trade deals with the rest of the world, it will still be worse off than if it had remained in the EU.

A further imponderable surrounds the deal agreed last December about how to avoid a hard border in Ireland, when Britain agreed that, if all else failed, Northern Ireland would maintain full regulatory alignment with the EU. Britain and the EU disagree about the scope of the agreement, but it could be incompatible with leaving the customs union.

One senior figure at DIT told me this week that, although Britain believed there was a technological solution to keeping the Border open, it had not yet found a suitable model anywhere else in the world.