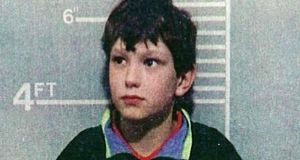 Jon Venables, one of the killers of toddler James Bulger in 1993, who admitted having more than 1,000 indecent images of children. Photograph: PA

One of the killers of British toddler James Bulger has been jailed for 40 months at the Old Bailey in London after he admitted having more than 1,000 indecent images of children and a “disgusting and sickening” child abuse manual.

Jon Venables, who was released on licence in 2001 after serving eight years for the murder of Bulger (2) in 1993 when he himself was 10 years old, pleaded guilty to four charges at the Old Bailey on Wednesday.

Bulger’s mother Denise Fergus and father Ralph Bulger were in court for the hearing – the second time Venables has admitted offences linked to child abuse images.

The court heard that Venables told police he had “stupid urges” and confessed to using the dark web to browse for material when he was arrested last year.

He admitted having 392 “category A” images, 148 category B images and 630 category C images. He also pleaded guilty to having a paedophile manual on or before November 17th last year. Venables, who has life-long anonymity, pleaded guilty via video link from custody.

Prosecutor Louis Mably QC told the court how the defendant’s computer was seized in November. Officers found images of children mainly aged between six and 13, although some were younger.

They also found a paedophile manual aimed at teaching abusers how to have sex with children “safely”.

Mr Mably said: “The manual is a disgusting and sickening document which falls far below any recognisable standard of morality.”

He said Venables had software on his computer to browse the dark web.

As he was being taken to a police station, Venables said: “This is my own fault. I have let people down again.

The court heard that a report had found that Venables was a “high risk of real harm to children” in the future.

It states that he has a “long-term and profound interest in children”.

Mr Mably said the indecent images charges carried a maximum sentence of 10 years with three years for the manual.

Mitigating, Edward Fitzgerald QC said Venables had been just 10 years old when James was murdered 25 years ago. He said the defendant served his full punitive sentence and “expressed profound remorse for his part in the murder and worked hard for rehabilitation”.

Since his release, he had lived in fear of reprisals.

His lawyer said: “He lived a relatively normal life where he worked hard for a living.” When he was arrested, he expressed “dismay” and remorse and said he needed help to understand why he did it.

Mr Fitzgerald said: “He has asked me to apologise to all those he has let down. He apologises to the family of James Bulger for the renewed distress he has caused by his renewed offending.”

He said that the “relapse” had been swiftly detected, adding: “Jon Venables still has the capacity for good and a capacity to change.

It is the second time Venables has been caught with child abuse images.

In 2010, he pleaded guilty at the same court to charges of downloading and distributing child pornography and was jailed for two years.

That was not the only time he had breached the terms of his licence.

In September 2008, he was arrested on suspicion of affray after a drunken brawl and was given a formal warning by the probation service.

Later the same year he was cautioned for possession of cocaine after he was found with a small amount of the class A drug.

During sentencing, Mr Justice Edis told Venables his was a “unique” case. He said: “This case is unique because when you were 10 years old you took part in the brutal murder and torture of James Bulger. That was a crime which revolted the nation and which continues to do so even after the 25 years that has passed since it happened.

“The facts of what you did are notorious and there is no need for me to repeat them here.”

He said the images of abuse he downloaded were “heartbreaking for any ordinary person to see this kind of material”. Given his background it was significant that a number of the images were of crimes against young boys, he said.

The judge described the manual as a “vile document” and revealed the cynical barbarity of its author. He told Venables that, as a consumer of these “products of barbarous evil”, he in turn caused it to happen.

He said the offences while on licence showed him as a “manipulative and dishonest” man. He added: “Your offences went back some months and required some ingenuity to keep it hidden.”

Mr Justice Edis made Venables the subject of an indefinite sexual harm prevention order and ordered that his laptop be taken away. He said the parole board would decide when Venables would be released.

Bulger was kidnapped, tortured and killed by Venables and Robert Thompson, who was also 10, in February 1993. – PA