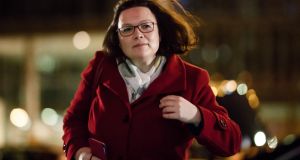 After 153 years in business, Germany’s centre-left Social Democratic Party has nominated its first woman – Andrea Nahles – as its next leader.

The announcement came hours after the SPD agreed a programme for government with acting chancellor Angela Merkel, head of the centre-right Christian Democratic (CDU/CSU) alliance.

News that Germany’s two biggest parties could soon be headed by women was a welcome kick-off to Germany’s carnival season on Thursday, when women storm Rhineland town halls to snip off men’s ties and – symbolically – seize power.

Since Merkel took over the CDU leadership in 2000, she has seen six SPD leaders come and go as the party grapples with an identity crisis. The next SPD leader hopes that seven will be her lucky number.

From next week, Nahles tours Germany to win over SPD members to a coalition agreement she insists carries a “big, fat social democratic signature”.

With a €46 billion spending plan on welfare and infrastructure, the SPD has loosened Merkel’s purse strings like never before. To guarantee the money is spent, the SPD has wrestled back control of the finance and labour ministries.

As SPD leader, Nahles would stay outside of government. With an eye on the post-Merkel era, party officials said Nahles could “present the party independently, outside the next cabinet”.

Until March 2nd, SPD members can vote by post on whether to accept the coalition deal. Hinging on the vote, by extension: the Nahles promotion, the credibility of her party – and Merkel’s fourth term.

After polling a disastrous 20.5 per cent last September, the SPD is now on just 17 per cent in polls.

Given that, it would be madness to refuse the deal and would force another election, she warned last month, because voters would “flip us the bird”. Her passionate speech fired up ambivalent delegates and left Schulz looking like yesterday’s man.

Hailing from the Eifel region bordering Luxembourg and Belgium, Nahles joined the SPD 30 years ago and rose through the ranks as a fiery left-winger praised by ex-SPD leader Oskar Lafontaine as a “gift from God” for the party.

After stations as general secretary and labour minister, she said she considered carefully Schulz’s offer of the party leadership.

If the SPD cannot come out successfully from this almost ideal constellation, then they are lost

“I have small daughter of seven years, it’s a big responsibility,” said Nahles, a single mother.

Another reason for considering her position: the SPD leadership has proven a poisoned chalice for her six predecessors. They have lasted just three years on average; Schulz was elected with unanimous support last March but stands down after the SPD’s worst federal election result since 1949.

He announced on Wednesday he was swapping the SPD leadership for the foreign ministry, elbowing aside incumbent Sigmar Gabriel after less than a year. A furious Gabriel has accused the party he led for eight years of shafting him.

“It’s regrettable how lacking in respect our SPD deal with each other now,” he said.

The anger towards Schulz is all the greater given he ruled out ever joining a Merkel cabinet. The row threatens to overshadow party debate on the coalition deal Berlin policy analysts dubbed solid if unexciting, with a tilt towards social democratic policy and personnel.

“This is the VW Passat of coalition agreements,” said Jan Techau, Europe programme director of the German Marshall Fund think tank. “If the SPD cannot come out successfully from this almost ideal constellation, then they are lost.”