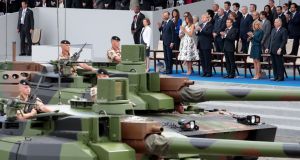 Donald Trump has ordered the Pentagon to plan a military parade that would see soldiers marching and tanks rolling down the streets of Washington, it was reported on Tuesday.

The move was instantly criticised, with one veterans’ group comparing the US president to “a wannabe banana republic strongman”.

Mr Trump is seeking a grand parade similar to the Bastille Day celebration in Paris, according to the Washington Post.

He outlined the plan at a meeting at the Pentagon on January 18th that included defence secretary Jim Mattis and joint chiefs of staff chairman Gen Joseph Dunford, the paper said, citing an unnamed military official.

“The marching orders were: I want a parade like the one in France,” the official told the Post. “This is being worked at the highest levels of the military.”

The White House confirmed that an event was in the works, though it did not offer further details. “President Trump is incredibly supportive of America’s great service members who risk their lives every day to keep our country safe,” press secretary Sarah Sanders said. “He has asked the Department of Defence to explore a celebration at which all Americans can show their appreciation.”

Mr Trump, who did not serve in the Vietnam war after receiving five draft deferments, has long spoken of his admiration for tough military figures such as General George Patton and frequently makes reference to “my generals”.

The president was deeply impressed by a parade in Paris on July 14th last year.

American and French soldiers marched together on the Avenue des Champs-Élysées to mark the centenary of America’s entry into the first world war and France’s annual Bastille Day holiday. It included tanks, armoured vehicles and a flyover of US and French military jets.

Mr Trump told reporters in September: “To a large extent because of what I witnessed, we may do something like that on the Fourth of July in Washington down Pennsylvania Avenue. We’re actually looking into it.”

But not for the first time in Mr Trump’s short political career, such a display is likely to prove divisive. On Tuesday retired general Paul Eaton, senior adviser to VoteVets, a progressive political action committee for military veterans, said: “Donald Trump has continually shown himself to have authoritarian tendencies, and this is just another worrisome example.”

In the past, Mr Eaton noted, Mr Trump has praised the tactics of autocrats such as Saddam Hussein and Vladimir Putin. He added: “Unfortunately, we do have a commander in chief right now as much as have a wannabe banana republic strongman.”

Richard Painter, former White House ethics lawyer for George W Bush, tweeted: “Cool. Just like in North Korea and Russia. But what do we do about those traitors who don’t clap during our Dear Leader’s speech?” – a reference to Mr Trump’s criticism of Democrats who did not applaud during his state of the union address. Journalist Joy Reid wrote on Twitter: “Oh my god ... he wants to be Kim Jong Un.”

A date for the event has not yet been chosen. Options include Memorial Day on May 28th, Independence Day on July 4th and Veterans Day on November 11th, which would coincide with the 100th anniversary of the end of the first World War. If the route includes Pennsylvania Avenue, it would pass by Mr Trump’s controversial hotel.

But the Washington Post added: “The cost of shipping Abrams tanks and high-tech hardware to Washington could run in the millions, and military officials said it was unclear how they would pay for it.”

Thomas Crosson, a spokesman for the Pentagon, said: “We are aware of the request and are in the process of determining specific details. We will share more information throughout the planning process.” – Guardian

1 Gardaí found naked man on a cross being whipped in Dublin club, court told
2 Many people identified as close contacts refusing to come forward for Covid-19 testing
3 Two in custody after Ryanair flight to Dublin forced to divert
4 Man (47) charged over damage to Luke Kelly statue in Dublin
5 Taoiseach says Garda document on Cowen case ‘not quite as portrayed’
Real news has value SUBSCRIBE