Britain to world: please pretend we are not leaving EU 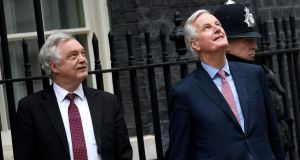 Britain has a message for the rest of the world after Brexit next year: please pretend we are still in the EU.

A “technical note” prepared by the British government calls on non-EU nations to treat the UK during its post-Brexit transition period after March 2019 as if it was still covered by more than 700 treaties Brussels has struck with third countries on everything from fishing rights to data sharing.

“To coin a phrase, they are going to tell the world that Brexit does not mean Brexit,” said one EU official.

Unless a deal is reached to keep the UK fully covered by such international agreements, Britain risks being bound by the obligations of the treaties during its post-Brexit transition period, without enjoying any of the benefits. The prospect is leading to a scramble in Whitehall to try to find a solution.

The paper published on Thursday represents an about-turn in the UK’s approach to the agreements, which it initially attempted to replicate with UK-only bilateral deals with the relevant countries.

Under the revised British plan, third countries would agree to “interpret relevant terms in the international agreements, such as ‘European Union’ or ‘EU member state’ to include the UK”.

“This approach is underpinned by international law and practice,” the document said, adding that it “represents the simplest way of ensuring the continued application of these agreements” during the post-Brexit transition period, which is set to run until the end of 2020.

Sam Lowe, a research fellow at the Centre for European Reform, said the move marked a U-turn from previous British policy to renegotiate UK-only versions of the deals.

“It is not great for our credibility as a reliable negotiation partner,” he tweeted.

Michel Barnier, the EU’s chief Brexit negotiator, warned last month that there was no guarantee that the UK would be able to continue benefiting from the agreements once it left the EU. He said that was something in the gift of the 100-plus countries with whom Brussels had negotiated the agreements.

“Our partners around the world may have their own views on this,” he said.

The post-Brexit status of the international treaties has turned into one of the biggest headaches for the UK government as it navigates the complexities of its exit talks.

The unique nature of the transition period means Britain will remain bound by its obligations under EU law, including respect of international agreements, while at the same time non-EU countries will be under no pressure to grant Britain the rights it enjoyed as an EU member.

As the agreements are with so many different countries, renegotiating new UK-centric versions of them could be a logistical nightmare, especially as Britain faces restrictions on its rights to negotiate international deals while it remains an EU member.

The UK document emphasises the importance of the agreements to post-Brexit Britain, noting that they “cover a wide range of key policy areas” including “trade, nuclear co-operation and aviation”.

Some of the most vital agreements are those concerning air services. EU bilateral treaties in this field currently underpin the right of British aeroplanes to land in countries such as the US, Canada and Israel.

The British document said the proposal was a reflection of the “unique and time-limited nature” of the transition period, which would be based on “the existing structure of EU rules and regulations”. – Copyright The Financial Times Limited 2018

List of countries where English can travel without quarantine on return is published 15:49
Russia’s constitutional changes to come into force on July 4th 14:04
Édouard Philippe resigns as prime minister of France 11:28
Texas governor orders wearing of masks in sharp reversal of policy 10:10
Turkey opens trial of 20 Saudis charged in connection with Khashoggi killing 09:27