Indian military on ‘high alert’ over crisis in Maldives 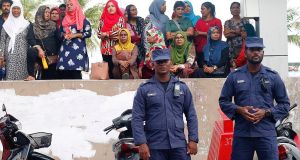 India has placed its military on “high alert” in anticipation of its possible deployment to neighbouring Maldives, following appeals by the island republic’s opposition for armed intervention to defuse an ongoing constitutional crisis.

Senior military sources in New Delhi said the country’s special forces units and naval and air force assets were on standby for “conceivable employment at short notice” to the Maldives to restore order in the Indian Ocean archipelago and to evacuate Indians from it.

India’s readying of its armed forces follows Tuesday’s request by exiled former Maldivian president Mohamed Nasheed for Delhi to dispatch an envoy backed by its military to assist in lifting the state of emergency on the island.

“On behalf of the Maldivian people, we humbly request India to send an envoy, backed by its military, to release judges and political detainees including [former] president Gayoom” tweeted Mr Nasheed, Maldives’ first democratically elected president, from exile in neighbouring Sri Lanka.

He requested “a physical presence” and called on Washington to stop all financial transactions of Maldivian leaders from being processed by US banks.

In 1988, India intervened in the Maldives to foil a coup against the government by deploying paratroopers and a warship to the island.

The Maldives was politically paralysed last week after its supreme court ordered the release and retrial of nine opposition leaders, including Mr Nasheed, all of whom were charged with terrorism.

It ruled that the charges were politically motivated and also ordered the reinstatement of 12 MPs who were ousted for switching allegiance to the opposition. With their return to parliament, President Abdulla Yameen’s Progressive Party would have lost its majority in the 85-member house.

Mr Yameen responded by rejecting the court’s decision, accusing it of plotting a “coup” against his government and followed it up on Sunday by imposing a state of emergency.

Government troops stormed the supreme court and arrested the chief justice and one other judge along with Mr Yameen’s half-brother and former Maldives president Maumoon Abdul Gayoom.

British-educated Mr Nasheed is hoping that India, which considers the Maldives to be a part of its wider strategic arc, will intervene militarily and restore order to the troubled island of some 400,000 people that is best known as a luxury tourist destination.

But India is wary of military involvement as it runs the risk of antagonising China, whose commercial, diplomatic and strategic influence in the Maldives has risen exponentially in recent years.

China has invested heavily in Maldives, which has emerged as a vital link in its maritime Silk Road initiative: a network of financial, military and political alliances between Beijing and Indian Ocean region states to further its economic and strategic dominance.

In a formal statement, India’s foreign ministry said it was “disturbed” and “concerned” by the declaration of a state of emergency in the Maldives and was monitoring the situation closely.

Senior Indian diplomats and security officials are at odds on how to deal with the Maldivian crisis. While the former favour “measured negotiation”, the latter are pressing for a more muscular approach to illustrate India’s status as a regional power.