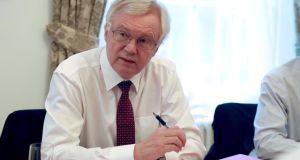 Britain’s secretary of state for exiting the EU, David Davis: “I do not think it was in good faith to publish a document with frankly discourteous language.” Photograph: Steve Parsons

Brexit secretary David Davis questioned the good faith of European Union negotiators on Thursday after they published a document proposing sanctions against Britain if it breached single market rules during a transition phase.

“What we’re about, is building an implementation period, which is to build a bridge to a future where we work well together. And I do not think it was in good faith to publish a document with frankly discourteous language, and actually implying that they could arbitrarily terminate in effect the implementation period. That’s not what the aim of this exercise is, it’s not in good faith, and we think it’s unwise to publish that,” he said.

The EU document, published on Wednesday, proposed a mechanism to allow the EU to suspend certain benefits of the single market for Britain during a transition phase after Brexit if Brussels considers that referring the matter to the European Court of Justice (ECJ) would take too long.

British and EU negotiators this week resumed negotiations, focusing on putting into a legal text the agreement reached at the end of the first phase of negotiations in December. The two sides hope to agree the terms of a transition period before a meeting of EU leaders in late March.

Prime minister Theresa May on Thursday chaired the second of two meetings this week of a cabinet sub-committee – dubbed her Brexit war cabinet – in an attempt to agree on Britain’s approach to talks on its future relationship with the EU. Mr Davis acknowledged there were still differences within the committee but described the atmosphere as constructive, asserting that many issues were already resolved.

Ms May also hosted a meeting in Downing Street with representatives of Japanese businesses in Britain. Speaking after the meeting, Japan’s ambassador to Britain, Koji Tsuruoka, said Japanese manufacturers expected free access to EU markets to continue after Brexit. He said his country’s investors had lobbied in Brussels as well as London to stress the importance of keeping trade between Britain and the EU as open as possible.

“Japanese companies are enjoying their operations in the UK and they have also today said they would very much like to continue this successful operation in the UK, which of course is comprised with access to the European market,” he said.

“Therefore the question is whether the arrangements that will be reached between the two sides will allow the Japanese companies, who are willing and in some ways determined to continue to operate in the UK, to allow them to make that happen. This is contingent on a number of factors and there is not just one single factor that will be determining the decision.”