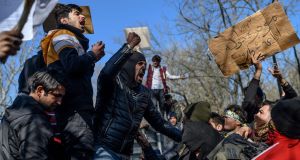 Migrants in the Turkey-Greece border buffer zone in Edirne: The EU will not increase financial aid to Turkey in response to threats. Photograph: Bulent Kilic

EU governments have refused to increase financial aid to Recep Tayyip Erdogan’s Turkey under the terms of their €6 billion migration deal, insisting Europe would not bow to threats from Ankara over opening its border with Greece.

Following an emergency meeting in Zagreb on Friday, EU27 foreign ministers held firm on their criticism of Mr Erdogan for using migrants for “political purposes” after a build-up of refugees on the Greek-Turkish border. Mr Erdogan had vowed to open the country’s frontier with Europe at the weekend, sparking the prospect of a new refugee crisis.

Germany has been among those pushing for more financial support for Mr Erdogan in an effort to stave off any repeat of Europe’s 2015 migration crisis. Before the events of this week, member states had discussed the possibility of freeing up about €1 billion from the EU’s current budget for the Turkey facility. But ministers on Friday said they would not ramp up aid in response to pressures on the Greek border.

“We should not react to the pressure that Turkey is exerting on us by offering them more money under pressure,” said Stef Blok, Dutch foreign minister. Josep Borrell, Brussels’s top diplomat, hit out at Mr Erdogan’s threats, calling them an “unacceptable way to push for further support”.

Turkey has demanded more financial help to integrate the nearly four million refugees in the country. The EU has been paying out cash to projects to help the integration process since 2016 but key programmes are due to run out of money soon. Ankara has complained that the cash disbursements are too slow and accused the EU of failing to live up to its promises to liberalise visas for Turks as agreed under the deal.

Mr Borrell on Friday said the two sides disagreed on how the deal was working and said Brussels would pay out about €3 billion in remaining funds to earmarked projects by the end of the year.

European governments have been at loggerheads over how to engage with Turkey after Mr Erdogan’s comment prompted thousands of refugees to head to the border with Greece, sparking violent clashes. Athens has pushed for a tough condemnation of Mr Erdogan’s actions but has met resistance from Berlin and The Hague, which want to keep diplomatic ties open with Ankara.

Greece’s foreign minister arrived at the meeting saying there was “clear” proof that Turkey “created and orchestrated” the migration flare-up. “The EU will not allow the instrumentalisation of human suffering,” Nikos Dendias said.

EU diplomats monitoring the border developments said the flow of people towards Greece had stopped in recent days and Mr Erdogan was back in compliance with the terms of the 2016 deal.

But Mr Borrell did not confirm reports that Turkish authorities were pushing people away from the frontier, calling for an immediate “normalisation” of border controls. – Copyright The Financial Times Limited 2020