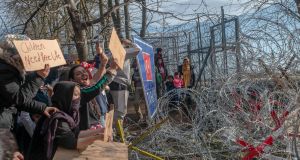 Migrants hold placards as they demonstrate while waiting at the buffer zone in front of the Pazarkule crossing on the Greece-Turkey border on Tuesday.Photograph: Bulent Kilic/AFP via Getty

The European Union has pledged aid for Greece to help it hold back thousands of migrants who have amassed at its borders in the hope of crossing from Turkey.

Thousands of people began trying to cross the border after Turkish president Recep Tayyip Erdogan announced his country would no longer hold them back and it was time for Europe to take its “share”, reneging on a deal struck with the EU to curb the last migration crisis in 2016.

“The situation at our border is not only an issue for Greece to manage, it is the responsibility of Europe as a whole,” European Commission president Ursula von der Leyen said as she visited the border area accompanied by the Greek prime minister. “We will hold the line and our unity will prevail.”

Ms Von der Leyen described Greece as the EU’s “shield”, and pledged €700 million in aid to the country. Border agency Frontex announced it would send officers and equipment in a “rapid border intervention” in response to an appeal from Athens for help in managing the EU’s frontier.

Greece accused Turkey of “trafficking” and announced it would not accept any requests for asylum, as its border guards fired tear gas into the crowds of men, women, and children, and pushed back boats.

The United Nations migration agency called on parties to protect migrants’ safety, but the leaders of the EU institutions said their priority was to support Greece in securing the frontier.

Brussels is determined to prevent a repeat of the last migration crisis five years ago, in which more than a million people entered the EU.

The EU’s foreign policy chief Josep Borrell visited Ankara to appeal to Mr Erdogan to hold to the deal to keep migrants on Turkish soil in return for financial aid. Europe’s foreign ministers are to hold an extraordinary meeting next week to discuss the issue.

The movement of people is being fuelled by a worsening conflict in Syria, particularly in Idlib close to the Turkish border, where Ankara is locked in conflict with the Russian-backed regime of Bashar al-Assad and a spiralling humanitarian disaster is forcing hundreds of thousands of families to seek safety.