The Irish Times view on EU-Turkey tensions: refugees caught in the middle

Although Turkey denies it has changed its policy, the signals sent by Erdogan to desperate refugees speak volumes about what appears to be his real intention 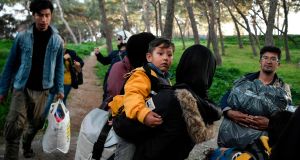 Refugees and migrants walk back to Moria camp after police push them back from the port of Mytilene, on the island of Lesbos, where they were hoping to get on a ferry to Athens on Tuesday. Photograph: Louisa Gouliamaki/AFP via Getty Images

Pressure on EU states to reform refugee and asylum rules – notably the Dublin Regulation, which puts responsibility for reception on the state where new arrivals disembark – has eased in recent years. That’s largely because the flow of refugees from Syria via Turkey was substantially cut by a 2015 EU-Turkey accord promising €6 billion in assistance to provide refuge, schools and healthcare for the 3.6 million Syrian refugees in Turkey.

The fighting in Idlib in the last year, however, has displaced up to another million, and domestic pressure on President Recep Erdogan has escalated sharply. Last week he opened up the door to Greece again, and the flow resumed to the heavily guarded Turkish-Greek land border where some 10,000 refugees have congregated, and on the sea, to the islands of Lesbos, Chios and Samos. There, filthy camps such as Moria on Lesbos or the Vathy reception centre on Samos, are already unable to cope while local people have attacked refugees and aid workers. Cyprus president Nicos Anastasiades has warned of a looming refugee “disaster” but insists that the EU stand up to the Erdogan “blackmail”. EU High Representative for Foreign Policy Josep Borrell is convening an “extraordinary meeting” of the Foreign Affairs Council in the coming week.

Although Turkey denies it has changed its policy, or repudiated the accord, the signals sent by Erdogan to desperate refugees, triggering a rush to the border, speak volumes about what appears to be his real intention – to leverage more money from the EU. Under the accord, refugees arriving on Europe’s frontiers were systematically turned back and housed in Turkey. Three years later, irregular arrivals were down 97 per cent. Turkey says the €6 billion is inadequate and claims to have itself spent more than $30 billion on the refugees. To date some €3.2 billion of the EU cash has been spent, and €4.7 billion been earmarked for initiatives which have included building schools and health centres. To Erdogan’s discomfort the cash distribution has bypassed the Turkish state and gone direct to NGOs dealing with refugees.

Although unwilling to write Erdogan a blank cheque, and despite the deal’s shortcomings, the EU needs the accord to survive. Its immediate response has been to help strengthen the Greek border while making reassuring noises about its commitment to current funding. But a possible resumption of massive flows of refugees across its southern borders should also act as a sharp incentive to renew internal discussions about refugee burden-sharing. The refusal of a number of member states, led by Hungary and Poland, to express practical solidarity in this regard is not sustainable with their obligations as members. Yet they are prepared to demand the generous economic assistance of others in the deadlocked EU budget discussions. Now is the time for a quid pro quo.