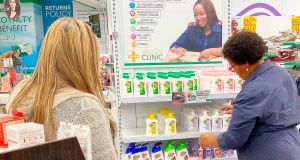 Customers shop for hand sanitisers at a store in Johannesburg on Friday following the government announcement of the first confirmed case of Covid-19 in South Africa. Photograph: Michele Spatari/AFP

South Africa’s first confirmed case of coronavirus has sparked fears that it could be harder hit by the disease than many countries because of its high HIV/Aids infection rates.

Health minister Zweli Mkhize said on Friday that no other cases of the coronavirus had been detected after a first case was confirmed on Thursday. However, he said that 18 people who were in contact with the 38-year-old South African who contracted it while on holiday in Italy had been quarantined.

“No country can ever stop coronavirus from reaching its shores. It’s not a failure in the health system,” Mr Mkhize told reporters, adding: “South Africans can face this and deal with it. We can fight this together”.

Despite the minister’s reassurances, many health professionals are concerned the coronavirus, or Covid-19, could have a severe impact on the population and the country’s crippled health system.

South Africa has more than seven million people living with HIV/Aids, a virus that seriously weakens a person’s immune system. It also has a long-running health crisis involving the lung disease tuberculosis (TB).

To date the government has not publicly addressed the dangers of the coronavirus to those suffering from HIV/Aids or TB. But president Cyril Ramaphosa has warned the disease will turn into a “national crisis” and its impact will be “huge”.

The Academy of Science of South Africa (Assaf) noted in a recent statement that those living with HIV have a higher chance of getting pneumonia due to influenza, and a three-fold higher fatality risk.

“It is not known [however] whether individuals with HIV or TB, both of which are highly prevalent in South Africa, are at increased risk for severe disease following infection with coronavirus,” Assaf acknowledged.

A number of medical experts have told local media that those most at risk of catching the coronavirus are those with chronic conditions such as HIV and TB, due to their compromised immune systems.

A HIV/Aids medical expert who spoke to The Irish Times on condition of anonymity said the government’s silence to date on the issue was likely because it did not want to create panic, and the fact that there was no hard evidence yet to support the theory that HIV/Aids and TB sufferers were more at risk.

“We are only dealing with suspicions at this stage, but hopefully preparations are going on behind the scenes to get ready for this worst-case scenario,” said the doctor.