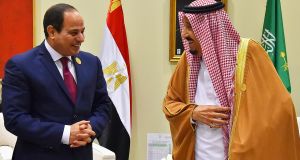 Arab leaders have concluded their 28th annual summit in Jordan, denouncing “foreign interference” in their affairs and calling for an end to conflicts in the region.

The 15 heads of state and seven senior ministers of the 22 member states of the Arab League referred primarily to Iran when condemning “interference” but refrained from naming the Shia rival of Sunni Saudi Arabia.

Since King Salman of Saudi Arabia came to the throne two years ago, the kingdom has sought to assume political leadership of the region, once exerted by Egypt, after years of securing Riyadh’s less ambitious requirements through “cheque-book diplomacy”.

In a bid to repair Egypt’s strained relations with the Saudis, President Abdel Fattah al-Sisi said it was “regrettable that certain powers are benefiting from the unprecedented situation in the region to bolster their influence and expand their control”. In an apparent reference to Iran, he said any attempt at confessional or territorial domination would have to face “clear and firm Arab opposition”.

While the Arab leaders called upon Turkey to withdraw its troops from Iraq, the summit’s focus was determined by Riyadh’s obsession with Iran’s involvement in the conflicts in Iraq, Syria and Yemen.

In Iraq and Syria, Iran supports the governments against jihadis but stands accused of backing Yemeni Shia rebels fighting the Saudi-sponsored government, although experts contend Iran’s intervention has been mainly diplomatic.

Egypt had incurred Saudi Arabia’s displeasure by backing the Syrian government against radical insurgents funded and armed by the Saudis and Qataris, and also failing to hand over the strategic Red Sea islands of Tiran and Sanafir claimed by the Riyadh. Egypt had also called for lifting Syria’s suspension from the Arab League. The Saudis retaliated by halting for six months the flow of oil to Egypt. According to the Saudi Aramco oil company this is due to be resumed shortly.

Arab leaders remain divided over the six-year Syrian conflict, which has killed more than 300,000 and driven half the country’s 23 million people from their homes. Saudi Arabia and Qatar continue to support anti-government proxies and to insist on the ousting of Syrian president Bashar al-Assad. Egypt, Algeria, Lebanon and Jordan argue he has to stay until the country is stabilised.

In spite of this fundamental difference, the leaders stressed the need to “re- double efforts to find a peaceful solution that preserves the unity of the country, its sovereignty and independence” and to “end the presence of terrorist groups”. Ministers attending the gathering were asked to provide aid for Syrian refugees in Jordan, Lebanon and Egypt.

The summit’s final communiqué, dubbed the Amman Declaration, called for a return to “serious and productive peace negotiations between Israelis and Palestinians” and reaffirmed the Arab commitment to a two-state solution, the emergence of an independent Palestinian state alongside Israel.

His regional envoy Jason Greenblatt met Mr Abbas and other Arab leaders, who have expressed serious concern over Mr Trump’s stated intention to move the US embassy in Israel to Jerusalem from Tel Aviv, where all 85 other national missions are located.

The Arabs argue transfer of the embassy would signify US recognition of Jerusalem as Israel’s exclusive, undivided capital, although the international community argues the parties must negotiate the fate of East Jerusalem, occupied by Israel in 1967, and Palestinians claim it as the capital of their future state.