Theresa May opts for Henry VIII approach to divorce 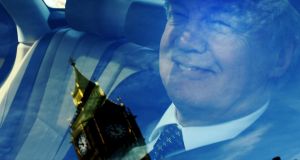 On Wednesday, Theresa May was compared with Elizabeth I. On Thursday, it was the Virgin Queen’s father, Henry VIII. In preparation for Brexit, the UK prime minister wants to transfer almost the entire body of EU law – the acquis communautaire – into British law, leaving it to MPs to decide after Brexit which laws they want to keep.

The text of some EU laws won’t make sense after Britain is no longer a member state, because, for example, they may refer to EU agencies or institutions. Amending thousands of pieces of legislation under normal parliamentary procedures would take years, so May wants the government to be able to make the changes itself.

She will do so using so-called “Henry VIII clauses”, named from the Statute of Proclamations of 1539 which gave the wife-murdering monarch the power to legislate by proclamation. Under the Great Repeal Bill, details of which were published on Thursday, the government could use secondary legislation, or statutory instruments, to amend primary legislation.

Statutory instruments are subject to minimal parliamentary scrutiny and are either passed or blocked altogether. Since 1979, just 17 of them, out of about 170,000, have been blocked. Brexit secretary David Davis told MPs on Thursday that the powers would be time-limited and that parliament would have to be satisfied the procedures for making and approving the secondary legislation were appropriate.

May has promised to remove Britain from the jurisdiction of the European Court of Justice (ECJ) after Brexit, but Davis said that British courts would continue to use ECJ case law to interpret EU-derived laws after Brexit. Where cases have been decided by reference to the EU Charter of Fundamental Rights, which Britain is abandoning, such case law will also continue to be used.

Davis said that no powers currently exercised by the devolved administrations in Scotland, Wales and Northern Ireland will be taken away after Brexit. Some decisions currently made in Brussels will be devolved, but others will return to Westminster to ensure that no new barriers to living and doing business within the UK should arise.

The Scottish National Party’s Stephen Gethins observed that Scotland’s aspiration to have a voice in the Brexit negotiations “also seems to have been given the Henry VIII treatment: a rough wooing is clearly taking place”.

But the SDLP’s Mark Durkan had the best line when he warned that what he called “the Great Download and Save until Delete Bill” would lead to “a carnival of reaction” and deregulation.

“Alongside the so-called bonfire of red tape, we will see ministers competing in a demolition derby to reduce various rights and environmental protections. It is also a charter for dilution before devolution. Does the secretary of state recognise that for some of us to trust Tory ministers with the ‘holding and moulding’ powers that he wants to give them would be like asking Attila the Hun to mind our horse?” he said.