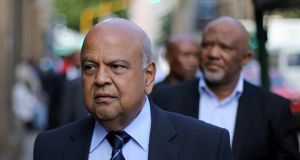 South African president Jacob Zuma has been accused by a coalition partner in his ANC-led government of planning to fire his finance minister because Mr Zuma suspects him of trying to overthrow the government.

Amid increasing tensions within the country’s ruling alliance, the South African Communist Party (SACP) said Mr Zuma had informed it of his intention to dismiss the minister, Pravin Gordhan, at a meeting this week.

SACP official Solly Mapaila told reporters at a Johannesburg press conference that the president was basing his decision on an intelligence report, which suggested that Mr Gordhan and Mr Jonas were about to use an investor roadshow to the UK and US as a platform to seek international support for regime change.

However, the SACP, which is part of the ruling tripartite alliance in South Africa, has rubbished the notion. “How can you believe such a trip is a trip against the country? We should not be treated like children. Those politically conscious won’t believe this thing,” Mr Mapaila told reporters.

He added that if Mr Gordhan and his deputy were to be sacked under these circumstances, the SACP would consider withdrawing party members from their cabinet posts as a protest.

The finance minister and his deputy were surprisingly recalled from London on Monday by Mr Zuma as they were preparing for an international investor roadshow, at which they were officially tasked with showcasing South Africa’s investment potential.

To date the president has refused to say why the two men were recalled, but rumours of a cabinet reshuffle in which both individuals would be sacked has deepened a simmering factional crisis in the ruling African National Congress.

Mr Gordhan has been increasingly at odds with Mr Zuma since the president was forced to reappoint him as finance minister in December 2015, in a bid to stabilise the markets.

Billions of rand were wiped of the value of the South African stock exchange that month, when Mr Zuma replaced respected economist Nhlanhla Nene as minister for finance with little-known lawmaker David van Rooyen.

Analysts maintain that Mr Gordhan has since been targeted by an ANC faction because of his work to clean up government, as it is undermining Mr Zuma and his allies’ efforts to manipulate state business to their financial advantage.

Over the past couple of years, many ANC members have divided into two factions because of perceptions of widespread corruption affecting the ruling party’s elite: those who side with Mr Zuma and his allies, and those who oppose them.

Mr Gordhan is seen as belonging to the latter group, and the finance minister’s efforts to end government corruption were whole-heartedly endorsed on Wednesday by party elders at the funeral of ANC icon Ahmed Kathadra.

Mr Kathadra (87), who had strongly criticised Mr Zuma over the past year and called on him to stand down, died on Monday following brain surgery to remove a blood clot.

The Kathadra Foundation requested that Mr Zuma not attend the anti-apartheid activist’s funeral on Wednesday, which he heeded.

Opposition parties have also reacted to the political uncertainty Mr Zuma’s actions have created this week. The Democratic Alliance said on Wednesday that it plans to bring a parliamentary motion of no confidence against the president.