Suspects were under surveillance after one spotted returning from Syria, police say 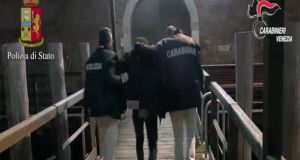 This video image shows the arrest of one of three Kosovars in Venice after one suspect was overhead on a phone intercept proposing they bomb the Rialto Bridge. Photograph: Italian Police/Carabinieri via AP

Four Kosovars were arrested in Venice on Wednesday night, accused of plotting to stage a major terrorist attack that officials feared might even have involved blowing up the city’s famous Rialto Bridge over the Grand Canal.

The arrests of the four people, three adults and a minor, who were allegedly inspired by Islamic State, came after months of surveillance. It was when police heard one of the men enthuse on the phone about last week’s attack in London by Khalid Masood, in which five people died, that they decided to intervene.

Police believe that the alleged terrorists were preparing a copycat action in Venice, aimed at an obvious tourist venue such as the Rialto Bridge, which is symbolically similar to Westminster Bridge, Masood’s target.

On the wiretaps, one man is reported to have said: “With [an attack in] Venice, we go straight to paradise given that there are so many nonbelievers here. We should put a bomb on the Rialto.”

Details of the police operation were released on Thursday by the investigating magistrate.

“We have monitored all their movements, all their contacts with the outside world and we were also able to monitor all their social media and PC traffic, everything they did to keep in contact and also to indoctrinate themselves,” said the magistrate, Adelchi D’Ippolito.

All four people have been in Italy for two years with legal residence permits, Mr D’Ippolito said. During this time they have by and large lived “ordinary lives” far below police radar, working in two bars around Piazza San Marco and living in two separate small flats in the centro storico, the historic centre of Venice.

“They lived an ordinary life, they had normal social profiles, and there was no sign of [Islamic] radicalisation,” he said.

It was when one of the four, Fisnik Bekaj (24), was noted returning from Syria, where he is alleged to have fought for Islamic State forces, that police became suspicious and began to monitor a potential terrorist cell.

Those suspicions were confirmed when the phone taps recorded one of the men as saying he was “ready to die for Allah”. Furthermore, electronic surveillance showed that the men consistently consulted sites that gave instructions on how to be an effective jihadist, including how precisely to kill with a knife.

“They were involved in a serious, self-taught programme, preparing themselves to carry out criminal activities,” stated Mr D’Ippolito.

Armed anti-terror units carried out the late-night raid on the cell’s two apartments.

In the past year there have been several indications of links between Italy, the Paris terrorist attack of November 2015, and the Brussels attack of March 2016. Some of the key figures in both attacks appeared to move in and out of Italy.

This week’s arrests would seem to corroborate the warnings of Italian police, who continually repeat that Islamic fundamentalist cells are alive and active, especially in northern Italy.

Main points: What restrictions have been imposed on Kildare, Offaly and Laois?