No turning back as divided UK hands in notice 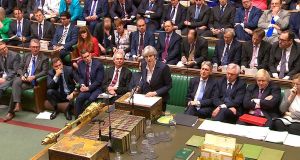 Britain’s prime minister Theresa May: Conservatives fail to understand the UK is a multinational state with four nations. Photograph: Parliament TV via Reuters

The benches and the galleries in the House of Commons were packed but the chamber was quiet and Theresa May looked grave as she made the announcement. A few minutes earlier in Brussels, Britain’s ambassador to the EU, Tim Barrow, had handed Donald Tusk a letter triggering article 50 of the Lisbon Treaty.

“This is an historic moment from which there can be no turning back. Britain is leaving the European Union, ” the prime minister said.

She used the same emollient tone in her statement as in her letter to Tusk, stressing Britain’s shared values with Europe and promising to take a constructive approach in the negotiations. On the benches behind her, one Conservative MP sported a union jack Alice band and another wore a tie with an image of Edward Elgar, the composer of Land of Hope and Glory.

Despite her conciliatory tone, the prime minister had plenty to offer her party’s diehards, including a promise to “take control of our own laws” and bring an end to the jurisdiction of the European Court of Justice in Britain. When she spoke of building “a Britain our children and grandchildren are proud to call home”, nobody was churlish enough to point out that, after Brexit, they might have no other choice.

Jeremy Corbyn made a flaccid speech, reflecting his party’s muddled approach to Brexit, which voted to authorise May to trigger article 50 with no preconditions but has set six vague tests for the final deal. It was when the Scottish National Party’s (SNP) Angus Robertson spoke that an edge entered into the debate.

Then, as Conservative MPs roared across the chamber, the prime minister blundered. Robertson never tired of reminding her that Scotland voted to remain in the EU, she said, but so too did her own constituency of Maidenhead in Berkshire. May’s remark, and the reaction of the benches behind her, appeared to confirm what Robertson suggested, that English Conservatives failed to understand that the UK was a multinational state with four nations, two of which voted to remain in the EU and two of which voted to leave.

A century ago, the British political system found itself incapable of accommodating Irish nationalism through Home Rule, and in the Commons on Wednesday, May’s disunited kingdom was on full display.

None of this dampened the ardour of Jacob Rees-Mogg, often described as the member for the 18th century, as he reached back into the 16th century for inspiration. “Does my right honourable friend recall the words of Francis Drake: ‘There must be a begynnyng of any great matter, but the contenewing unto the end untyll it be thoroughly ffynyshed yeldes the trew glory’? I wish my right honourable friend good luck and good fortune in her negotiations until she comes to true glory and is welcomed back to this House as a 21st century Gloriana,” he said.

Gloriana was, of course, Queen Elizabeth I, a figure remembered with less affection in Scotland than she is in England.

Coronavirus: Patients forced to share beds in India as cases continue to rise 07:21
Protesters gather in US cities on Thursday night after death of George Floyd 06:47
Trump announces clampdown on social media companies 22:19
Boris Johnson brushes off police statement that Cummings may have broken law 20:53
Coronavirus: French look forward to ‘liberty’ with second stage of reopening 20:01

1 Coronavirus: HSE experts support the early reopening of schools
2 Quarantine may be lifted for arrivals into Ireland from countries with low Covid-19 cases
3 The momentum behind calls to ease lockdown may become irresistible for politicians
4 Irish planning for no-deal Brexit to restart as EU-UK talks go badly
5 All students will not return to school even if social distancing relaxed – McHugh
Real news has value SUBSCRIBE