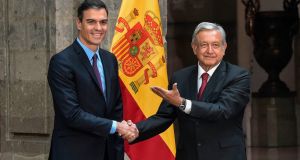 A request by the president of Mexico, Andrés Manuel López Obrador, that Spain’s King Felipe should apologise for human rights abuses committed during the conquest of the Latin American nation in the 16th century has drawn an angry response.

Mr López Obrador said in a video message that he had written to both the Spanish king and Pope Francis calling for “an apology for the violations of what are now known as human rights – there were massacres, there was coercion, the so-called conquest was carried out with the sword and the cross.”

The Mexican president’s proposal comes almost exactly 500 years after the arrival in America of Hernán Cortés, the Spaniard who led the conquest of Mexico with the backing of the Catholic Church. In two years, Mexico will mark the 500th anniversary of the fall of Tenochtitlán, the vast capital of the Aztec empire, at the hands of Cortés and his men.

The leftist López Obrador therefore envisages 2021 as “the year of reconciliation” between Spain and Mexico over the two countries’ bloody past.

But Spain’s Socialist government responded to the news of the letters, which were dated March 1st, by saying that King Felipe had nothing to apologise for.

“The arrival, 500 years ago, of Spaniards in Mexican territory cannot be judged in the light of contemporary considerations,” read a statement from the government. “Our two peoples have always known how to read our shared past without anger and with a constructive outlook, as free peoples with a common legacy and an extraordinary influence.”

Opposition parties on Spain’s right have reacted with outrage to the Mexican president’s idea.

Pablo Casado, leader of the conservative Popular Pafty (PP), described it as “an insult to Spain”.

He added: “The idea that [López Obrador] should go and say that Spain committed all kinds of barbarities in that beautiful country is something I will not allow . . . We are one of the most important nations in humanity.”

Albert Rivera, the leader of the other main party on the right, Ciudadanos, accused the Mexican president of “falsifying history”.

Others used even stronger language, with the well-known novelist Arturo Pérez-Reverte calling on Mr López Obrador to apologise himself, given that his grandfather was Spanish. “If this individual really believes what he says, he’s a fool,” the writer posted on Twitter. “If he doesn’t, he’s a blighter.”

The only main Spanish political party which welcomed the Mexican apology request was the leftist Podemos. The party’s spokeswoman, Ione Belarra, wrote that Mr López Obrador “was very right to demand that the king should say sorry for the abuses of the ‘Conquest’.” She added that a Podemos government would set in motion a “process for the recovery of democratic and colonial memory”.

The negative legacy of Spain’s conquest of the Americas has rarely been addressed in the country’s political arena. Last November, the US city of Los Angeles removed a statue of Christopher Columbus following a campaign by indigenous groups. However, lobbying for the removal of a statue of the same explorer in Barcelona has so far come to nothing.