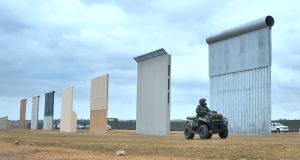 The US Department of Defense shifted $1 billion (€880m) to plan and build a 92km section of “pedestrian fencing”, roads and lighting along the border between the United States and Mexico, the Pentagon chief said on Monday.

Last week, the Pentagon gave Congress a list that included $12.8 billion (€11.3bn) of construction projects for which it said funds could be redirected for construction along the US-Mexico border.

US president Donald Trump declared a national emergency last month in a bid to fund his promised border wall without congressional approval.

Acting secretary of defense Patrick Shanahan said in a memo to secretary of homeland security Kirstjen Nielsen that the Department of Defense had the authority to support counter-narcotics activities near international boundaries.

Mr Shanahan authorised the US army corps of engineers to begin planning and executing the project that would involve building 92km of 5.5m high fencing, constructing and improving roads, and installing lighting within the Yuma and El Paso sections of the US-Mexico border. – PA