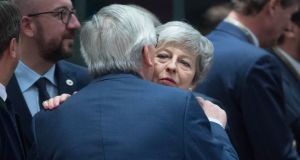 UK prime minister Theresa May is greeted by president of the European Commission Jean-Claude Juncker in Brussels on Thursday. Photograph: Stefan Rousseau/PA

In approving Theresa May’s request for a short unconditional extension to April 12th EU leaders have effectively done no more than kick the can down the road for a few days.

The hard decisions will come if and when the House of Commons again votes down the withdrawal agreement between London and Brussels in a third “meaningful vote” – now commonly referred to as MV3.

No point in crossing bridges until you have to.

Should, in the interim, MV3 be agreed, leaders are all of a mind that the UK should be given an opportunity to put its house in order, enabling it to leave the EU and enter the transition period in an orderly manner.

No need then for the leaders to return to Brussels for an emergency summit.

In the more likely event that MV3 is voted down we are in a different ball game. May would then have to decide if she wanted to make another application for another extension. The leaders would have to reconvene.

A notification of intention to apply for such an extension has to be lodged before April 11th but will not be automatically granted.

The EU leaders have repeatedly said, for example, that changes to the political declaration – dealing with the UK’s future relationship with the EU – are still possible, and an expression of willingness by May to embrace customs union membership and strong ties to the single market – a reversal of key red lines – would certainly qualify as such a justification. As would a general election.

Secondly the British would in doing so have to spell out their intention to reverse their position on not contesting the European Parliament elections. If they remain members while the elections are under way there are several million citizens who could demand their vote in the courts.

But there remain, it appears, subtle differences between some of the key member states about whether a long extension should be granted even if the UK can make a persuasive case.

The Germans still insist that the leaders must do everything they can to delay and if possible overturn Brexit.

“We also think that the start of our future relationship shouldn’t be a crash. Therefore we will do anything to ensure that doesn’t happen.”

It is a view supported by the Dutch and almost certainly by the Irish.

The French are less flexible, and not out of hostility to the UK. Paris and Berlin have different appreciations of the ability of the British political system to get itself out of this mess.

French president Emmanuel Macron has let it be known he views a long extension as pointless, a continuation of uncertainty for businesses and citizens, and an obstacle to the EU’s other important agenda items, not least discussions on its future shape.

A unanimous vote on a lengthy extension could prove difficult to achieve.