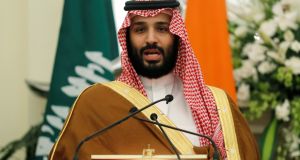 Saudi Arabia’s crown prince Mohammed bin Salman: alleged to have been stripped of some of his authority. Photograph: Adnan Abidi/Reuters

The heir to the Saudi throne has not attended a series of high-profile ministerial and diplomatic meetings in Saudi Arabia over the last fortnight and is alleged to have been stripped of some of his financial and economic authority, the Guardian has been told.

The move to restrict, if only temporarily, the responsibilities of Crown Prince Mohammed bin Salman is understood to have been revealed to a group of senior ministers earlier last week by his father, King Salman.

The king is said to have asked bin Salman to be at this cabinet meeting, but he failed to attend.

While the move has not been declared publicly, the Guardian has been told that one of the king’s trusted advisers, Musaed al-Aiban, who was educated at Harvard and recently named as national security adviser, will informally oversee investment decisions on the king’s behalf.

The Saudi embassy in Washington has declined multiple requests for comment since the Guardian approached it on Tuesday.

The relationship between the king and his son has been under scrutiny since the murder of Saudi journalist Jamal Khashoggi, which was alleged to have been ordered by bin Salman and provoked international condemnation of the crown prince. This has been denied by the Saudi government.

Experts on the Middle East are divided over whether the murder, and concern over the kingdom’s role in the conflict in Yemen, have led to tension at the heart of the notoriously secretive royal court.

But while most observers expect bin Salman to accede to the throne, there are some signs that the king is seeking to rein in his controversial son at a time when Saudi Arabia is under the spotlight.

The Guardian has been told bin Salman did not attend two of the most recent weekly meetings of cabinet ministers, which are headed by the king.

The crown prince has also not attended other high-profile talks with visiting dignitaries, including one last week with the Russian foreign minister, Sergey Lavrov.

Bin Salman also was not present at a meeting with senior economic and finance officials earlier this week, a meeting between the king and the grand mufti, a meeting with the head of the World Health Organisation, and meetings with the prime minister of Lebanon, and ambassadors from India and China.

A spokesman for the Saudi government in Washington declined to comment on the absences or provide information on the crown prince’s whereabouts.

The spokesman also did not comment on the alleged decision to remove from bin Salman some of his financial responsibilities, or the decision to informally appoint al-Aiban to oversee financial matters.

It is unclear from recent official press statements about the king and the prince’s activities whether bin Salman has been absent from all of the high-profile events, but the prince has not appeared in any recent photographs or press statements, apart from a report that he spoke to Japan’s prime minister Shinzo Abe over the phone last week.

A spokeswoman for the Russian foreign ministry confirmed bin Salman had not met Lavrov last week. She also said no such meeting had been planned in advance.

Though bin Salman has missed meetings before, a source familiar with the workings of the royal court said there was genuine surprise at some of the no-shows in the last fortnight.

The king is understood to have been particularly displeased with his son’s absence from the cabinet meeting on Tuesday, during which the king discussed the many challenges facing the kingdom.

In a two-hour address, the king is understood to have raised concerns over alleged lost investments into Saudi Arabia.

It led to a demand that all major future financial decisions would, for the time being, need the king’s personal approval, according to the account given to the Guardian. The decision was considered effective immediately and concerned major investments by the kingdom and other contracts.

The New York Times also reported this week that Saudi Arabia’s government investment fund has gone through a “messy break-up” with a Hollywood investor after the investor decided to stop doing business with the fund and return a $400 million Saudi investment in the wake of Khashoggi’s murder.

Saudi Arabia has adamantly denied that bin Salman played a role in the killing, but the CIA is widely reported to have concluded with a medium to high degree of confidence that the crown prince ordered the murder of Khashoggi at the Saudi consulate in Istanbul.

Saudi Arabia is also facing international scrutiny on other alleged human rights abuses of political detainees, including one dual American-Saudi citizen, Walid Fitaihi, who is being held without charges.

The Guardian reported last week that there appeared to be subtle signs of a rift emerging between the elderly king and his son. Tensions are said to have flared up after the prince announced two important personnel decisions hours after the king left Saudi Arabia for an official visit to Egypt.

The promotion of Princess Reema bint Bandar bin Sultan to serve as Saudi ambassador to the US, and the promotion of bin Salman’s brother, Khalid bin Salman, to the ministry of defence, were allegedly announced without the king’s approval or knowledge.

The decrees to make the changes were signed by the crown prince in his role as “deputy king”, which some experts said was exceedingly rare.

Bin Salman did not personally welcome his father home at the airport upon his return to Saudi Arabia from Egypt, which would have been customary.

A spokesman for the Saudi embassy said: “It is customary for the King of Saudi Arabia to issue a royal order delegating the power to administer the affairs of the state to his deputy, the crown prince, whenever he travels abroad. That was the case during King Salman’s recent visit to Egypt.”

He said the announcements were made by bin Salman in his capacity as deputy king and on behalf of the king. “Any insinuation to the contrary is simply baseless.”

Some Middle East writers say the suggestions of a rift have been overblown and that the crown prince was already serving as a “king in everything but name”.

Madawi al-Rasheed, a professor at the London School of Economics, has argued that King Salman has staunchly supported his son even in the wake of the Khashoggi murder, opting to tour the kingdom “with his son by his side, sending a strong message that he retains the full support of the royal court”.

Others have said that the crown prince could be absent from public events for any number of reasons, that the king has been a staunch supporter of his son despite previous controversies and that his stance is unlikely to change.