Father and son who fled Syria buried after Christchurch shooting 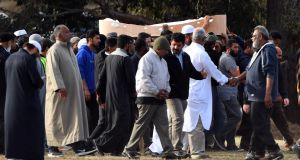 Mourners carry a casket during funerals for some of the 50 victims of the mosque shootings at the Memorial Park Cemetery in Christchurch, New Zealand. Photograph: EPA 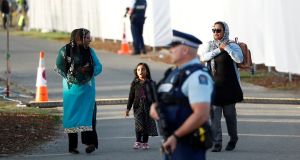 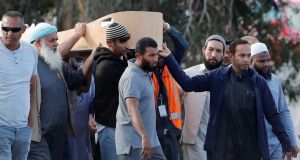 People attend the burial ceremony for some of the victims of the mosque attacks, at the Memorial Park Cemetery in Christchurch, New Zealand. Photograph: Jorge Silva/Reuters 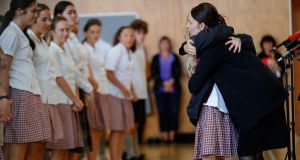 New Zealand’s prime minister Jacinda Ardern hugs a student during a visit to a high school in Christchurch on Wednesday. Photograph: Vincent Thian/AP

Burials for the 50 people killed the New Zealand terrorist attack have begun in Christchurch as the prime minister, Jacinda Ardern, returned to the city to pay her respects and comfort those affected by the killings.

On Wednesday, father and son Khaled and Hamza Mustafa, who arrived in New Zealand as refugees from Syria, were the first victims to be buried. The prime minister told reporters: “I cannot tell you how gutting it is to know that a family came here for safety and for refuge, and they should have been safe here.”

Earlier, police said they planned to release most of the bodies back to their families by Wednesday night, with Ms Ardern promising to work with authorities to see if the coronial process could be sped up in future to comply with Islamic burial rites.

Police commissioner Mike Bush said the process had to be “done properly” to prevent jeopardising future prosecutions. “We must prove for prosecution the cause of death to the satisfaction of the judge,” he said. “You cannot convict for murder without proving that cause of death ... to get it wrong is unforgivable and you cannot come back from that.”

Ms Ardern also visited students at Cashmere high school, which is dealing with the loss of two students, and implored the children to join her in rejecting messages of racism and hate.

“This is my request, I alone cannot get rid of those things, I need help from every single one of us,” she said. “So yes, gather together, show those outpourings of love, but also let New Zealand be a place where there is no tolerance for racism ever. That’s something we can all do.”

It was Ms Ardern’s second visit to Christchurch since the attack.

The crowd of 400 students performed a haka and took the opportunity to question Ms Ardern over the attack. One student asked the prime minister how she was feeling, to which Ms Ardern replied: “I am very sad.”

As she promised on Tuesday, Ms Ardern did not say the attacker’s name, and at one point was spontaneously hugged by one of the pupils.

With 29 people still in hospital after the attacks, one surgeon said at an emotional media conference how he had imagined the critically injured four-year-old girl he was operating on was one of his children.

Dr Adib Khanafer, a vascular surgeon at Christchurch hospital, said he was called out of another surgery on Friday afternoon to operate on the young girl. “I have four kids,” he said. “The youngest is seven, the oldest is 14, and I just imagine this was one of my kids. I was able to do my job and I left my emotions until after ... after I had repaired her.

“I am from England. I am a Muslim. And I am Arab. And all my colleagues, Kiwis, have not stopped emailing me, texting me, and sending me flowers.”

Elsewhere, Ms Ardern said access to military-style semi-automatic weapons would be the focus of new gun control laws, adding: “We have a large number of loopholes in our laws.”

She said Australia took 12 days to change its gun laws following the 1996 Port Arthur massacre and “we will do it in less”. The country’s peak hunting body, Fish and Game NZ, said it would support a ban and buyback of military-style semi-automatic weapons and restrictions on high-capacity magazines.

The Australian alleged gunman has been charged with one count of murder. Mr Bush said he expected a “considerable number of the most serious charges” would be added to the prosecution before his next court appearance.

A multinational investigation team comprising of officers from the Federal Bureau of Investigation, Australian Federal Police and New South Wales police has assembled in Wellington to trace the background of the suspect, Brenton Tarrant.

Mr Bush said intelligence agencies from other Five Eyes countries were also helping to “build a comprehensive picture of this person that we will put before the court”. Five Eyes is an intelligence alliance comprising Australia, Canada, New Zealand, the UK and the US.

“What I can say at the moment most positively is there was only one attacker,” he said. “The investigation focus is to work out if anyone else was involved in supporting or in any other away and we are still conducting that part of the investigation.”

An independent investigation has also been ordered into New Zealand’s intelligence agencies, following reports that it received tip-offs from the Muslim community and a gun seller about an apparent increase in white supremacist activities.

The Australian prime minister, Scott Morrison, has called in the Turkish ambassador to Canberra over comments made by President Recep Tayyip Erdogan, who said that anyone who visit Turkey with anti-Muslim views would be sent home in a coffin “like their grandfathers were” after the Gallipoli landing in the first world war.

Authorities in New Zealand said they were “alert” to the risks of reprisal attacks. – Guardian

1 Further restrictions to be considered in Dublin and elsewhere as Covid-19 cases rise
2 Dublin farmer discovers overnight rave on his land
3 Restaurants’ role in Covid-19 transmission came as surprise to many
4 Coronavirus: 188 new cases and no further deaths amid concern over eight counties
5 Gardaí used spit hoods on at least 14 people with mental illness
Real news has value SUBSCRIBE