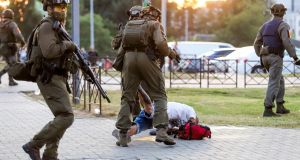 Police surround a protester during a protest in Minsk on Tuesday. Photograph: AP

International pressure is growing on Belarus to end a brutal crackdown on pro-democracy protesters who accuse Alexander Lukashenko, the country’s autocratic ruler of 26 years, of stealing last Sunday’s presidential election.

Officials say more than 6,000 people have been detained and some 250 hurt during post-election demonstrations, which the state has met with extreme police violence and severe restrictions to internet access across the country.

Protesters took to the streets again on Wednesday evening and drivers blocked major roads in the capital, Minsk, hours after hundreds of women in several cities and towns, many of them dressed in white and carrying flowers, formed human chains to denounce the beatings and arbitrary arrests that have shocked the nation of 9.5 million. Hundreds of people also gathered outside a Minsk prison to seek news of detained relatives.

Mr Lukashenko again condemned protests that he claims are being orchestrated from abroad, and said most demonstrators were unemployed people “with a criminal past”, having described them as drunks and drug addicts earlier this week.

A day after the EU said it would reassess relations with Minsk after a “neither free nor fair” election and the police crackdown, the bloc’s foreign affairs chief Josep Borrell announced that Belarus would be discussed on Friday at an extraordinary meeting of member states’ foreign ministers.

Sweden’s top diplomat, Ann Linde, said they would address the possible imposition of sanctions on Belarus, and her nation joined seven of its Scandinavian and Baltic neighbours in urging Mr Lukashenko to end police violence, free detainees and “immediately engage in a genuine political dialogue with the opposition”.

On a visit to the Czech Republic, US secretary of state Mike Pompeo urged the EU “not to resort to declarations but to take action, to take measures, because the Belarusians have the same right to freedom and democracy as we do”.

“We want the people of Belarus to have the freedoms that they are demanding,” he added. “We urge that the non-violent protesters be protected, not harmed. It’s not in anyone’s best interests to do that.”

Meanwhile, Lithuania, Poland and Latvia – EU members that border Belarus – offered to mediate between Mr Lukashenko’s regime and the opposition.

“If our initiative is met in a negative way, of course, the other means remain on the table – and that is sanctions, either at the European level or at the national level,” said Lithuanian president Gintanas Nauseda.

Svetlana Tikhanovskaya – the main challenger to Mr Lukashenko in an election in which he officially received an unlikely 80 per cent of votes – fled from Belarus to Lithuania on Tuesday.

The former teacher reluctantly entered politics when her husband, an opposition blogger, was jailed in May, and she sent her children to Lithuania for their own safety during a campaign that saw tens of thousands of people attend her rallies and back her call for peaceful change in Belarus.

Aides to Ms Tikhanovskaya (37) said that, with her husband in jail and her children abroad, she had been coerced into leaving Belarus and into making a video in which she urged her compatriots to end their protests.

Lithuanian foreign minister Linas Linkevicius said the Belarusian authorities had “presented her with . . . not much of a choice: either leave the country or other, let’s say, not very pleasant alternatives.”

Mr Lukashenko (65) insists foreign “puppet masters” are trying to destabilise his country by manipulating Belarusians that he has called “sheep”.

“The core of all these so-called protesters are people with a criminal past who are now unemployed,” the former Soviet state farm boss told officials on Wednesday.

“So I’m asking you nicely and warning everyone: all those who are not working should get a job.”