US president Donald Trump has expressed his surprise at the selection of Kamala Harris as Joe Biden's running mate for the upcoming US presidential election, calling the California senator "nasty" and "disrespectful." Video: Reuters 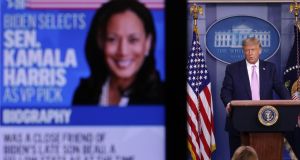 US president Donald Trump speaks during a news conference in the White House about Democratic presidential candidate Joe Biden chosing Kamala Harris to be his running mate in the 2020 general election. Photograph: Alex Wong/Getty Images

Donald Trump’s reelection campaign wasted no time in targeting Kamala Harris with scattergun attacks that sought to define her as “the most liberal leftist nominee” ever to run for vice-president.

The US president hurled insults from the bully pulpit of the White House while his campaign released an attack ad within minutes of Democratic rival Joe Biden’s announcement, following up with a media conference call and barrage of emails.

With 77-year-old Mr Biden far from certain to run for a second term, Ms Harris, now his most likely successor, is naturally more of a target than most running mates. But the Trump campaign struggled to reconcile an apparent contradiction: accusing her of being an overzealous criminal prosecutor in the past on the one hand, while suggesting that she and Mr Biden would neglect law and order on the other.

“She is a person that’s told many, many stories that weren’t true,” Mr Trump, who has made more than 20,000 false or misleading claims while in office according to the Washington Post, told reporters at the White House.

Mr Trump – who twice donated to Ms Harris’s campaign for California attorney general – went on to assert, without offering evidence, that she supports raising taxes, “socialised medicine”, slashing funds for the military and putting a stop to fracking.

“She did very, very poorly in the primaries, as you know,” Mr Trump said. Ms Harris dropped out of the Democratic primary race in December, before the first nominating contests were held in Iowa and New Hampshire, saying she did not have funds to continue.

The president went on to call Ms Harris “nasty”, a word he often applied to his opponent Hillary Clinton in 2016, as he recounted her grilling of his supreme court nominee Brett Kavanaugh in 2018.

It was a reference to the opening primary debate in which Ms Harris challenged Mr Biden over his past opposition to school busing, although she also said, “I do not believe you are a racist,” and he has since made clear he does not hold a grudge.

The Trump campaign appears to have settled on portraying Mr Biden as beholden to the radical left as its least worst strategic option. It quickly folded Ms Harris, the first woman of colour to be named to a major party US presidential ticket, into that narrative – and her voting record in the Senate does place her on the left of her party.

Marsha Blackburn, a Republican senator for Tennessee, told reporters: “This has completed the leftist takeover of the party and of their radical agenda. Kamala Harris will be the most liberal leftist nominee for VP that our country has ever seen. If you want to find proof of where she has moved left, you can start with looking at her support for Bernie Sanders’ health care takeover.”

Ms Blackburn went on to claim that Mr Sanders’ plan would take away private health insurance from millions of Americans and cost $32tn. Ms Harris did imply early in the campaign that she endorsed Sanders’ Medicare for All, but later clarified that she did not favour scrapping private insurance.

Ms Blackburn also cited Ms Harris’s support for the Green New Deal, arguing that it would cost jobs and be hugely expensive. Ms Harris was a supporter and co-sponsor of the original Green New Deal resolution offered by Senator Ed Markey.

“They will look at her record as a DA [district attorney] in San Francisco and say, ‘Security in our communities is important and I don’t want someone who says that they are not going to be tough on hardened criminals’.”

But Trump campaign messaging undercut itself on this topic: it argued that in 2004, DA Harris chose not to seek the death penalty against a gang member who killed a San Francisco police officer, but it also stated she fought to keep inmates locked up in prison so they could be used for cheap labour, “championed” a law to put the parents of truant kids in jail and prosecuted a mentally ill woman who was shot by San Francisco police.

The word “tantamount” is open to interpretation. The claim about sanctuary cities included a hyperlink to a New York Times article that was 12 years old.

Lindsey Graham, a Republican senator for South Carolina and Trump ally, took a more measured approach, acknowledging the threat and summing up why Ms Harris will motivate voters on both sides of the partisan divide. “Senator @KamalaHarris will be a formidable opponent,” he tweeted. “She is smart, aggressive, and has fully bought in to the Democratic Party’s very liberal agenda.”– The Guardian