Maureen Dowd: The hell that awaits a woman vice-presidential candidate 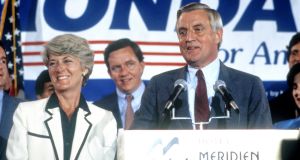 Geraldine Ferraro and Walter Mondale campaign at the Democratic Convention in 1984 in San Francisco. She later said she was not “prepared for the depth of the fury, the bigotry, and the sexism my candidacy would unleash”. Photograph: Sonia Moskowitz/Images/Getty Images

On the cusp of Joe Biden teaming up with a woman, I am casting back to my time covering the first woman who was a serious contender for veep.

The feminist fairy tale – which began with women crying and popping Champagne on the convention floor in San Francisco in 1984 – had a sad ending. Cinderella with ashes in her mouth.

It’s hard to fathom, but it took another 36 years for a man to choose to put a woman on the Democratic ticket with him. To use Geraldine Ferraro’s favourite expression, “Gimme a break!”

After Walter Mondale picked Ferraro, a Queens congresswoman, the first man and woman to share a ticket had to consider all sorts of things: Could he kiss her on the cheek? (No.) Could he call her “dear” or “honey”? (No.) Could they hug? (No.) Could they tell jokes, as Johnny Carson did, about how angry Joan Mondale would be when her husband kept coming home late and saying he had been in private sessions with the vice-president? (No.)

They wanted to be seen as peers, more TV anchor team than suburban couple. Mondale could not seem paternal or patronising or use phrases like “a ticket with broad appeal”. Ferraro, who walked faster, had to stop bounding ahead of her running mate.

They knew that the way they conducted themselves would forever recast the perception of men and women in politics. So they were wary in the beginning. As one Democratic consultant put it at the time, “He looked like a teenager on the first date with that ‘How in the world do you pin the corsage on her?’ problem.”

Before a fundraiser in New York once, a Democratic official presented Ferraro with a wrist corsage. She refused to put it on. “That I will not do,” she told the man politely. Sometimes, the introductory music for the petite blonde was the 1925 ditty, Five Foot Two, Eyes of Blue. One magazine hailed her as “America’s Bride”.

When the ticket headed South, Jim Buck Ross, Mississippi’s 70-year-old commissioner of agriculture, called the 48-year-old Ferraro “young lady” and asked if she could bake blueberry muffins. Ferraro’s historic campaign was full of images never before seen on the presidential trail.

As she went onstage, Gerry, as she was universally known, would hand off her pocketbook to an aide. Her charming press spokesman, Francis O’Brien, sometimes ironed her dresses – as her main foreign affairs adviser, Madeleine Albright, looked on.

It was fascinating to see age-old customs through the eyes of a female candidate.

“People hand me their babies,” Ferraro marvelled. “As a mother, my instinctive reaction is how do you give your baby to someone who’s a total stranger to kiss, especially with so many colds going around? And especially when the woman is wearing lipstick?”

It was the first time a candidate running for the White House had talked about abortion using the phrase, “If I were pregnant”, and about foreign policy with the phrase, “As the mother of a draft-age son”.

The “smartass white boys” around Mondale, as many feminists called them privately, got nervous when she talked about being a mother. How could she be tough and a mother, they wondered, not seeing the obvious: Mothers are tougher than anyone. Fearing white male backlash, they tried to control her bouncy Queens persona.

Ferraro walked the same tightrope that tripped up Hillary Clinton when she wondered if she should wheel around in that debate and tell the creeping Donald Trump to scram. If she got angry, would she seem shrill, that dreaded word, and turn off voters?

The Mondale inner circle wanted Ferraro to play the traditional running-mate role of hatchet man. But Gloria Steinem warned, “Nothing makes men more anxious than for a woman to be masculine.”

George H W Bush excitedly proclaimed after his debate with Ferraro that he had tried to “kick a little ass”; his press aide called Ferraro “bitchy”; and Barbara Bush said Ferraro was a word that “rhymes with rich”. What started as a goose bump blind date with history curdled, as Ferraro got dragged into a financial mess involving her husband’s real estate business.

Right after the Reagan landslide, Democrats began muttering about returning to white Anglo-Saxon men on the ticket and not having any more “feminised” tickets that didn’t appeal to them.

I called women across the country for a magazine autopsy I was writing and was shocked to hear how ambivalent women still were about a woman running the country. A 36-year-old mother of three from Bristol, Tennessee, told me: “I put myself in her shoes. Could I sit down and logically make decisions for everybody without cracking up? I think women in general are weak. I know that sounds awful. But we women know we have our faults.”

Sexism is like race. It’ll pop out. It’s in our DNA.

The next year, Ferraro put out a memoir talking about how depressed and paranoid she got, and how much she cried, admitting that she was not “prepared for the depth of the fury, the bigotry, and the sexism my candidacy would unleash”.

She said Mondale’s male aides were so condescending that she instructed them to “pretend every time they talk to me or even look at me that I’m a grey-haired Southern gentleman, a senator from Texas”. (In her memoir, Sarah Palin aimed her sharpest barbs at John McCain’s aides.)

We don’t know whom Biden will choose but we do know the sort of hell she will endure at the hands of Team Trump. Even after the #MeToo revolution, even with women deciding this election, have the undercurrents of sexism in America changed so much? Hollywood, after all, only just began forking over major budgets to female directors, after years of absurdly stereotyping them.

I asked Francis O’Brien if he thought, 3½ decades after he watched the sandstorm of sexism around Ferraro, whether her successor would have an easier time.

But on the bright side, when Chuck Schumer wanted to call Nancy Pelosi a lioness on Friday, referring to her negotiations with Republicans on the relief bill, he checked with her first to see if she would prefer lion. The speaker chose lioness. – New York Times