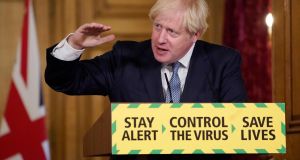 British prime minister Boris Johnson. He has insisted his government did not bring in quarantine rules earlier because “the scientific advice was very clear that it would make no difference” to the arrival of the epidemic. Photograph: Getty Images

The British government’s decision to maintain loose border controls in the early months of the pandemic “accelerated” the spread of coronavirus, MPs have concluded in a new report.

The House of Commons home affairs select committee said on Wednesday that the government’s decision not to impose quarantine rules increased the number of “imported” infections, and saw “many more” people contract the virus.

As the pandemic spread Britain remained in a small club of countries that failed to match the tighter borders and stringent quarantine rules on arriving travellers that had become common in other countries.

The committee concluded that “thousands of people with Covid-19 arrived in or returned to the UK in February and March”.

In late January people returning to the UK from Covid-19 hotspots such as the Chinese city of Wuhan were quarantined in officially-designated accommodation. A programme to identify and manage airport passengers with symptoms was also launched.

However, the policy changed in mid-March when the government shifted its focus to delaying rather than containing the virus’s spread.

Prime minister Boris Johnson has insisted his government did not bring in quarantine rules earlier because “the scientific advice was very clear that it would make no difference” to the arrival of the epidemic.

Describing the policy change on March 13th as a “critical error”, MPs said they were unable to find any scientific evidence to “justify this inexplicable decision”.

They also found that the decision not to include Spain in the earlier country-specific measures in late February was a mistake as doing so “could have slowed the virus spread”.

The committee concluded: “The UK’s experience of Covid-19 has been far worse as a result of the government’s decision not to require quarantine during March, which would have reduced the number of imported infections.”

In early June all four nations in the UK introduced a sweeping 14-day quarantine system for all arrivals from across the world. Three weeks later ministers announced a list of countries that would be exempt from the overall rules because they were considered relatively safe.

But last week Britons were given just hours’ warning that they will be required to self-isolate for two weeks on their return from Spain and Luxembourg after a spike in coronavirus cases in each country sparked fears of a wave of reinfection from abroad.

MPs said the government had been right to update the guidance but called for “improvements” in the way countries were removed from the government’s travel corridors exemption list.

Yvette Cooper, chair of the Commons home affairs select committee, said: “The government’s failure to have proper quarantine measures in place in March as the infection was spreading fast was a grave error and meant Covid spread faster and reached more people.

“The UK was almost unique in having no border checks or quarantine arrangements at that time. That alone should have rung loud alarm bells for ministers and made them think again.” – Copyright The Financial Times Limited 2020