Dominican Republic says it has no record of arrival of royal, who left under cloud of scandal

Spain's former king Juan Carlos has decided to leave his country, a dramatic exit designed to protect the monarchy after a barrage of corruption allegations surfaced against him. 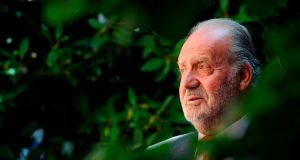 The whereabouts of former king Juan Carlos remained a mystery on Tuesday after he abruptly left Spain under a cloud of scandal, and the Dominican Republic, where several Spanish newspapers reported he was, said it had no registry of his arrival.

One Spanish media outlet speculated he was in Portugal.

The royal palace said on Monday that Juan Carlos, who abdicated in 2014 over a previous scandal, was leaving the country so that his personal affairs would not overshadow his son King Felipe’s reign, in a statement that stunned Spaniards.

The palace did not say where the 82-year-old went, triggering intense speculation about his whereabouts.

The Migration Office in the Dominican capital Santo Domingo said the former king’s last trip to the Caribbean country was from February 28th to March 2nd. The foreign ministry also said it had no information about a possible arrival of Juan Carlos.

Adding to the confusion, RTVE broadcaster, citing unnamed sources close to Juan Carlos, said the former monarch wanted to return to Spain soon and El Mundo quoted an anonymous person close to him saying he may come back in September.

Pressure had been building on Juan Carlos and Felipe to take action to protect the monarchy, after Spanish and Swiss prosecutors started examining allegations of bribes relating to a high-speed rail contract and reports of offshore accounts.

Juan Carlos is not formally under investigation in either country and so is not technically a fugitive.

Juan Carlos came to the throne in 1975 after the death of General Francisco Franco and was widely respected for his role in helping guide Spain from dictatorship to democracy, but recent scandals have tarnished his image.

“I think he’s running away like a coward. He should admit what he has done and be up front,” said Madrid resident Paz Rodriguez.

Retiree Santiago Pradas was more understanding. “They’re not being fair. There are many politicians, many parties, who have stolen three times as much,” he said.

Juan Carlos’s lawyer said on Monday the ex-king was “at the disposal” of prosecutors. Neither the lawyer nor the Royal House have commented on whether Juan Carlos has left Spain or where he is. Via his lawyer, the ex-king has repeatedly declined to comment on the corruption allegations.

La Vanguardia said Juan Carlos, who is keeping the title of King Emeritus, left the palace on Sunday, before going to Portugal by car on Monday and flying on to the Dominican Republic.

The former monarch plans to stay for a few weeks with a family who made their fortune in sugar plantations, the newspaper said, without citing a source.

The ABC newspaper also said Juan Carlos had gone to the Caribbean country. However El Confidencial said he was in Portugal, not far from Lisbon.

Asked about his whereabouts, Portugal’s foreign ministry replied that it had nothing to say, while local authorities in the region had no information.

Prosecutors in Geneva and Madrid are looking into offshore accounts and possible bribes. The Geneva prosecutor’s office did not respond to a request for comment. In Spain, the supreme court’s prosecutor’s office said it was carrying on with its investigation, adding that Juan Carlos’s decision to leave changed nothing.

Switzerland classifies the Dominican Republic as a country with which judicial co-operation is “very difficult”, but Spain has an extradition agreement with it.

“Institutions should not be judged, people should be judged. In this case, Juan Carlos has said clearly he is at the disposal of the legal system if necessary, just like any other Spaniard,” he told a news conference.

His leftist Podemos allies took a much tougher stance, saying Juan Carlos was “trying to evade justice” and putting the future of the monarchy in question.

Jose Juan Toharia of polling firm Metroscopia said the royal household’s handling of the situation would go down well with Spaniards, because Juan Carlos had said he would answer any legal case and Felipe is trusted by 70 per cent of the population. – Reuters