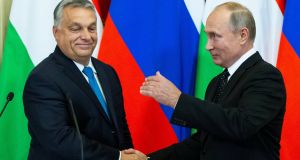 Russian president Vladimir Putin and Eurosceptic Hungarian premier Viktor Orban have discussed deeper energy and financial co-operation and congratulated each other on maintaining good ties despite the severe chill in east-west relations.

While battling the EU over what it calls his attack on democracy, the rule of law and European values, the populist Mr Orban continues to hold frequent, friendly meetings with Mr Putin and to call for a rapprochement with Moscow.

The mood at Tuesday’s meeting in the Kremlin was in stark contrast to Mr Orban’s visit last week to the European Parliament in Strasbourg, where he clashed angrily with deputies who voted to launch disciplinary proceedings against Hungary over its treatment of migrants, NGOs and media and academic freedoms.

Critics say Mr Orban is helping Mr Putin widen cracks in the EU and Nato while following the Russian leader’s authoritarian playbook and giving Moscow too much economic leverage in Hungary, particularly with a €12 billion contract for a Russian state firm to expand its only nuclear plant – the terms of which are secret.

“Hungary is undoubtedly one of our key partners in Europe. Relations are developing in practically every direction,” Mr Putin said in welcoming Mr Orban back to the Kremlin.

Mr Orban complained that bilateral trade had fallen “due to sanctions imposed by the EU” on Russia, “but we managed to turn the trend around in our favour. I came here today to thank you for all the work that we did together”.

“I’m very glad that over several years we have had balanced, predictable relations,” Mr Orban was quoted as saying by Russian government newspaper Rossiiskaya Gazeta.

“One can’t say that there are always favourable international conditions for our co-operation. But all unpleasant things exist for us to fight against them together. I think we are managing to do that.”

After their talks, Mr Putin said a planned TurkStream project to bring Russian gas to southeast Europe via Turkey could feed a pipeline running through Hungary, which “allows for reliable and uninterrupted supply of gas for European consumers even in moments of peak demand”.

Mr Orban said it was “no secret that when the gas pipeline from the south comes towards Hungary, we would like it to continue through Hungary. That would be a great opportunity for Hungary”. They also agreed terms for Russian gas supplies to Hungary until the end of 2020.

They also discussed relations between Russia and the European Union and the conflicts in Syria and in Ukraine, where Mr Orban’s government is blocking some co-operation between Kiev and Nato over education reforms that he says discriminate against the country’s Hungarian minority.