As French as snails in garlic: Debate rages over absurd grammatical rule

Paris Letter: No agreement on past participle as linguists try to get changes 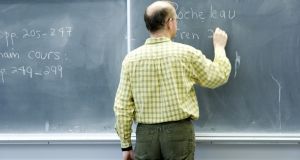 'One of the chief arguments for abolishing the rule is that it is a waste of time. The average French child spends 80 hours learning it, without ever understanding.' Photograph: Getty Images

As a native English-speaker who has constantly endeavoured to perfect her French, I have been delighted by a grammatical controversy raging in French newspapers and on radio and television since the beginning of this month.

“The present rules on agreement with the past participle are obsolete and complicated to the point of being absurd,” Arnaud Hoedt and Jérôme Piron, retired French teachers from Belgium, wrote in Libération newspaper.

The rule requires agreement between the past participle and the complement of the direct object (abbreviated as COD) in verbs conjugated with avoir (to have) – but only if the COD precedes the participle.

I trust I make myself obscure?

In its basic form, the rule is simple. One writes, la pomme que j’ai mangée (the apple that I ate) but j’ai mangé une pomme. In the first instance, the past participle of the verb “to eat” takes two “e’s”, in the second only one, because “apple” is feminine. Believe me, it gets a lot more complicated.

It was a comfort to read in Le Monde that “This is the rule which most destabilises the French”, and to learn that French journalists and politicians, including the very literary president Emmanuel Macron, break it.

One of the chief arguments for abolishing the rule is that it is a waste of time. The average French child spends 80 hours learning it, without ever understanding. “What could we not teach our children in 80 hours, instead of the past participle? Piano? Tap-dancing?” Hoedt and Piron ask in a stage show attacking the absurdities of French grammar and titled La Convivialité.

The rule was first suggested by King François I’s official poet, Clément Marot, in the 16th century, because he admired the way the Italians co-ordinated their past participles with singular and plural, masculine and feminine. Complex grammatical rules enabled the elite “to distinguish themselves from ignorant people and simple women”, wrote a gentleman of the period.

The French notoriously hate change, and the government faces an uphill battle getting them to accept more urgent reforms

Voltaire famously wrote that Marot “brought two things back from Italy: the pox and agreement with the past participle. I believe the latter has done more damage.”

Like our own century, the 16th century was a time of linguistic effervescence. Some 2,000 new words were imported from Italy. The letters “v” and “j” were added to the French language. No one worried about spelling. Montaigne, for example, spelled the verb connaître (to know) six different ways.

The obsession with codifying and regulating came with the 17th century. The Académie française was founded in 1635 to raise barriers to foreign words, and to endow French with a rigid structure. In the 19th century, the consolidation of the republican school system under the great educator Jules Ferry fortified the rules.

In 1900, a brave education minister published a decree that would have made it acceptable to drop agreement with the past participle. The Académie française was so outraged that the reform was abandoned.

Agreement with the past participle “is as French as snails in garlic”, the director of Libération, Laurent Joffrin, wrote in an editorial which nonetheless pleaded for the French language to be allowed to evolve.

Hoedt and Piron were supported in their attack on past participles by nine different linguistic bodies in Belgium. They did not seek the support of the Académie française. “Not being composed of linguists, the Académie has never managed to produce decent grammar, and so cannot serve as a reference,” they wrote.

After days of confusion during which the French-speaking Fédération Wallonie-Bruxelles was widely reported to have unilaterally changed the rule, Eric Etienne, the spokesman for the Francophone Belgian education ministry (Flemish speakers have their own ministry) announced that “It wouldn’t make sense” for Belgium to go it alone, if the rest of the world’s 275 million French speakers do not follow.

The present French education minister, Jean-Michel Blanquer, admitted that he too has difficulty mastering the rule on past participles. But he refused to change it. The French notoriously hate change, and the government faces an uphill battle getting them to accept more urgent reforms of, for example, the unemployment and pension systems.

The abolitionists received support from Bernard Pivot, who for 15 years hosted a literary talk show called Apostrophes, and who now heads the committee that awards France’s highest literary award, the Prix Goncourt.

When he meets his maker, Pivot told Europe 1 radio, he imagines God will ask him to explain the rule on past participles, saying “because even though I’m God, I’ve never understood it.” Whereupon Pivot intends to reply, “Nor have I, Lord.”