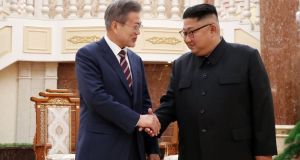 North Korean leader Kim Jong-un expressed confidence that progress would come in talks with the US about denuclearisation of the Korean Peninsula, as he welcomed his South Korean counterpart Moon Jae-in to Pyongyang for a summit to try to revitalise the peace process.

Mr Moon was greeted by tens of thousands of North Koreans shouting “Unification” and “Motherland!” as he arrived in the North Korean capital, and the South Korean president was welcomed with hugs by Mr Kim.

It was two bilateral meetings in April and May between Mr Moon and Mr Kim that kickstarted renewed efforts to find lasting peace, but despite increasingly warm ties between the two Koreas, the knotty process of nuclear diplomacy has stalled.

Mr Kim sounded a confident note, thanking Mr Moon for helping to orchestrate the historic summit with US president Donald Trump in Singapore in June.

“President Moon helped find the start of the historic North Korea-US talks,” he said as the two leaders began their summit.

“Thanks to this [meeting], regional conditions stabilised and a more advanced outcome is expected,” he said.

Mr Moon responded in equally upbeat fashion at the start of their talks in the headquarters of the central committee of the Workers’ Party of Korea.

Mr Moon is the first South Korean leader to visit Pyongyang in 11 years. He was greeted by a huge delegation and driven to the Paekhwawon State Guest House in an open-topped Mercedes.

The summit takes place at a very auspicious time, ahead of the traditional Chuseok harvest festival, a major holiday on both sides of the border between the two Koreas, who have been divided since the Korean War (1950-53) ended in a ceasefire but without a formal peace treaty.

“I wish this will be a summit that produces abundant results as a gift to the 80 million people of this nation for Chuseok,” Mr Moon said.

The third inter-Korean summit comes against a backdrop of stalled US-North Korea talks.

While the process has led to the repatriation of the remains of some missing American war dead and a moratorium on nuclear tests by the North, and seen the US hold off on joint military drills, the US feels there has been little substantive progress in achieving a nuclear-free Korean Peninsula.

Mr Trump cancelled a trip by secretary of state Mike Pompeo over a lack of progress in denuclearisation talks.

The talks also come at a time when Mr Moon, who has enjoyed enormous popularity at home, is seeing his support slide over concerns about the economy, especially rising house prices. A win on North Korea could help give him a boost in the polls.

The two leaders met until 5.45pm local time (9.45am Irish time) and were due to resume on Wednesday.