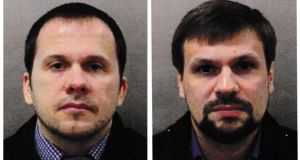 The two men accused by the United Kingdom of carrying out a nerve agent attack in Salisbury have been identified and are civilians not criminals, Vladimir Putin has said.

“We know who they are, we have found them,” Mr Putin said at an economic forum in the eastern Russian city of Vladivostok, adding the two men - named by the UK as Alexander Petrov and Ruslan Boshirov - may soon make appearances in the media to protest their innocence.

“These are civilians,” Mr Putin said in remarks reported by Russian news agencies. “There is nothing criminal here.”

British officials have said the men were agents of Russian military intelligence dispatched to kill Sergei Skripal, a former Russian spy who had given information to British intelligence. He was imprisoned in Russia before being released in a spy swap in 2010.

Mr Putin’s remarks appeared to be a denial that the men worked for Russia’s military intelligence service, the Main Directorate, commonly called the GRU.

British officials this month charged the two men in absentia with the attempted murder with novichok of Sergei Skripal, his daughter, Yulia, and a police officer who investigated the scene. Scotland Yard released CCTV images of the two suspects at Salisbury train station on the day of the attack.

British prime minister Theresa May told parliament earlier this month the attack “was almost certainly also approved outside the GRU at a senior level of the Russian state”.

Scotland Yard has issued a European arrest warrant for the two men, who have not been seen publicly since the March attack.

Little is known about their identity, and British police say they believe the names in their passports may be pseudonyms. The Russian news agency Fontanka found traffic tickets and a Moscow apartment where Mr Boshirov is registered, but neighbours have never seen him. Even less is known about Mr Petrov. A man with the same name and birth date works for a Russian state company that produces vaccines.

Scotland Yard said that the two men had “travelled extensively” on their passports. Fontanka reported the two had visited Milan, Geneva, Amsterdam and Paris several times since September 2016.

Mr Putin called on the two men to appear in the media to protest their innocence, saying he “wanted to address them directly”.

The Russian’s president’s words marked a departure from his country’s earlier position, which was to disregard the evidence released by Scotland Yard as a fabrication.

A foreign ministry spokeswoman had previously claimed that video stills showing the two men at Gatwick airport were doctored because they showed both men passing through passport control at the same time, although the airport has more than one corridor for arriving passengers.

The Skripals survived exposure to the nerve agent, as did Nick Bailey, the police officer, and Charlie Rowley, who found a bottle containing novichok. Rowley’s partner, Dawn Sturgess, died in July after also being exposed to the poison.

The attack has led to the largest break in relations between London and Moscow since the end of the cold war. After the incident on March 4th, the United Kingdom and more than two dozen other countries expelled a total of 150 Russian spies working under diplomatic cover. Russia kicked out a similar number of those countries’ envoys.

In 2006 ex-FSB agent Alexander Litvinenko was poisoned with the radioactive isotope polonium-210. Mr Litvinenko’s accused murderers, Andrei Lugovoi and Dmitry Kovtun, have become public figures in Russia since the attack, regularly making appearances in the media. Mr Lugovoi has become a member of parliament. – Guardian