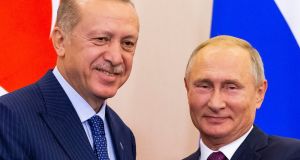 The decision by Russia and Turkey to establish a demilitarised zone around Syrian’s Idlib province to avert a Syrian army offensive to recapture the jihadi-controlled area, risking a humanitarian disaster, is likely to be only temporary.

If Syria is to emerge from the seven-year war intact, armed groups will have to surrender or be expelled and some 1,200 Turkish forces will have to withdraw. Syria, the region and Europe cannot afford to allow al-Qaeda fighters and other jihadis, deemed “terrorists”, to maintain a permanent base in Idlib from which they can launch attacks elsewhere.

Russia has imposed this deal in order to avoid a clash or rift with Turkey. Without Russian air support, the Syrian army cannot launch a major offensive against an estimated 30,000 well-armed fighters in Idlib. Damascus will have to bide its time.

Russia is playing a double game in the region. It has acquired naval and air bases in Syria and seeks to gain influence in Lebanon, Iraq, and Jordan while the US has disengaged and the Trump administration has angered the Arabs by abandoning the Palestinians. Their calls for justice and self-determination have been regarded as the “Arab cause” since Israel’s establishment in 1948.

A year ago, Idlib was declared a “de-confliction” or ceasefire zone by Russia, Iran and Turkey during a meeting in Astana in Kazakhstan. However, appointing Turkey monitor of the zone was a major Russian mistake.

Turkey has erected a dozen posts, each manned by 100 troops, but has not carried out the other main task assigned at Astana: separation of al-Qaeda from non-al-Qaeda fighters. Instead, Turkey has recruited armed elements from the mainly jihadi factions for its National Liberation Front while al-Qaeda’s Hay’at Tahrir al-Sham has gained control of 60 per cent of Idlib.

Ankara’s objective is to seize a wide stretch of Syrian territory along the border extending from the Turkish-occupied Afrin district in the west to the Euphrates River, some 800km to the east. Turkish president Recep Tayyip Erdogan justifies this plan by claiming he must protect Turkey from Syrian Kurdish fighters allied to Turkey’s own restive Kurds.

Turkey has, however, sought for a century to regain territory lost in the post-first World War carve-up of the Ottoman empire. Erdogan, who sees himself as a successor to Ottoman rulers, is determined to accomplish this national ambition. Some commentators have suggested he could turn occupied territory into a “Republic of northern Syria” modelled on breakaway Turkish Cypriot Northern Cyprus recognised only by Ankara.