Kavanaugh and accuser to testify before US Senate 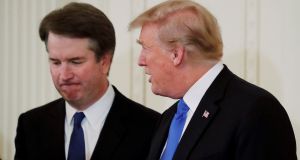 US president Donald Trump talks with his nominee for the supreme court, Brett Kavanaugh, at his nomination announcement in the East Room of the White House on July 9th. Photograph: Jim Bourg/Reuters

US supreme court nominee Brett Kavanaugh and the woman who accused him of a 1982 sexual assault will be called to testify in the Senate next Monday, complicating what had appeared to be a smooth confirmation process.

With Mr Kavanaugh’s once-safe nomination for a lifetime job on the top US court now appearing in jeopardy, the conservative federal appeals court judge nominated by US president Donald Trump had meetings at the White House earlier on Monday and called the assault allegation “completely false.”

“As I said earlier, anyone who comes forward as Dr Ford has done deserves to be heard. My staff has reached out to Dr Ford to hear her account, and they held a follow-up call with Judge Kavanaugh this afternoon,” Mr Grassley said on Monday.

He added there would be a public hearing next Monday “to give these recent allegations a full airing”.

The move would delay a planned vote in the judiciary committee on Thursday to advance Mr Kavanaugh’s confirmation.

Republican Senate majority leader Mitch McConnell has said he wants to hold a full Senate vote on Mr Kavanaugh before the October 1st start of the supreme court’s new term. It was unclear whether that goal would have to be adjusted.

The White House appeared eager to resolve the matter quickly.

“Judge Kavanaugh looks forward to a hearing where he can clear his name of this false allegation. He stands ready to testify tomorrow if the Senate is ready to hear him,” the White House said before Mr Grassley’s announcement.

Asked if it was possible for him to believe Dr Ford’s story and still conclude that Mr Kavanaugh was qualified to serve on the supreme court, Mr Graham said: “I’d have a hard time putting somebody on the court that I thought tried to rape somebody.”

Democrats, already fiercely opposed to Mr Kavanaugh, whose confirmation could consolidate the conservative grip on the top US court, had demanded a delay in the committee’s vote to let the FBI investigate.

The FBI said in a statement on Monday night that last Wednesday it received a letter dated from July concerning the allegation, and forwarded it to the White House counsel. It added the alleged misconduct “does not involve any potential federal crime”.

“Obviously, if Judge Kavanaugh has lied about what happened, that would be disqualifying,” Republican senator Susan Collins told reporters before Mr Grassley’s announcement, adding she would like the chance to observe Dr Ford, the California university professor who made the allegation, to decide the credibility of her account.

Republicans control the Senate by only a narrow margin, meaning any defections could sink the nomination and deal a major setback to Mr Trump, who has been engaged in a so-far successful effort since becoming president last year to move the supreme court and broader federal judiciary to the right.

In careful remarks at the White House in which he did not offer his view on the actual allegation against his nominee, Mr Trump called for the Senate to go through a “full process” and accepted a small delay, although warning that “it shouldn’t certainly be very much”.

“I think he’s very much on track,” Mr Trump said of Mr Kavanaugh.

A source close to Mr Trump, who spoke on condition of anonymity, predicted trouble ahead should the Kavanaugh issue not be resolved soon, adding that “with seven weeks to go until an election, this is not the discussion that the Republicans want to be having in the era of the ‘me too’ movement.”

Dr Ford has accused Mr Kavanaugh of trying to attack her and remove her clothing while he was drunk 36 years ago in a Maryland suburb outside Washington when they were students at different high schools.

In television interviews on Monday, Dr Ford’s Washington-based lawyer, Debra Katz, said her client would be willing to speak out publicly. Asked if that included sworn testimony at a public hearing before senators, Ms Katz told CBS’s This Morning programme: “She’s willing to do what she needs to do.”

The confirmation fight comes just weeks before the November 6th congressional elections in which Democrats are seeking to take control of Congress from Mr Trump’s party and work to stymie the president’s agenda.

Mr Trump picked Mr Kavanaugh to replace retired justice Anthony Kennedy, a conservative who sometimes sided with the court’s liberal wing. Without Mr Kennedy on the court, the justices are split 4-4 between liberals and conservatives.

The president, who himself faced multiple accusations of sexual misconduct that emerged during the 2016 presidential election, said he did not meet with Mr Kavanaugh when the nominee visited the White House.

“I have never done anything like what the accuser describes – to her or to anyone,” Mr Kavanaugh said in a statement issued by the White House, his first comment since Dr Ford’s identity was revealed on Sunday.

“Because this never happened, I had no idea who was making this accusation until she identified herself yesterday,” added Mr Kavanaugh, who said he was willing to talk to the judiciary committee in any way it deemed appropriate “to refute this false allegation, from 36 years ago, and defend my integrity”.

Mr Kavanaugh has said he was not at the party where the incident allegedly occurred, according to a White House official

The comments by Dr Ford’s lawyer suggested any public hearing could be explosive. Dr Ford believes Mr Kavanaugh’s alleged actions were “attempted rape” and “that if it were not for the severe intoxication of Brett Kavanaugh, she would have been raped,” Ms Katz told NBC’s Today programme.

Ms Katz told CBS that Dr Ford had consumed a beer but was not drunk. Dr Ford was 15 at the time of the alleged incident. Mr Kavanaugh was 17.

Dr Ford detailed her story in a letter sent to Democratic senator Dianne Feinstein in July. The letter’s contents leaked last week and Dr Ford identified herself in an interview with the Washington Post published on Sunday. – Reuters