Yemen conflict, dubbed the ‘forgotten war’, is on the brink of a humanitarian catastrophe 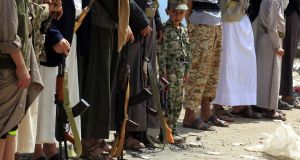 A Yemeni child stands among armed supporters of Houthi rebels during a gathering to mobilise more fighters into the Hodeidah battlefront, in Sanaa, Yemen, last week. Photograph: Yahya Arhab/EPA

As the world’s attention remains focused on a likely catastrophic humanitarian fallout from any Syrian army offensive against jihadis in Idlib province, Saudi Arabian and Emirati forces have renewed the existential battle against Houthi rebels for Hodeida, Yemen’s key city and port.

Under pressure to avert a predicted humanitarian disaster, the Syrian army and its Russian and Iranian allies have deferred a major assault on Idlib.

Russian president Vladimir Putin is set to meet his Turkish counterpart, Recep Tayyip Erdogan, on Monday in a fresh bid to agree on how to eliminate jihadi factions in Idlib and impose a ceasefire without causing massive civilian casualties.

Every military move in Syria is closely scrutinised. The Yemen conflict is dubbed the “forgotten war”.

In Yemen, western-supported and armed Sunni Saudis and Emiratis had paused their offensive until the August 7th collapse of the UN effort to launch peace talks between the Riyadh-sponsored government and the Houthi rebels, who have modest Iranian support.

About 38,500 civilians have been displaced in Idlib; more than 30,000 have fled Hodeida, some to Yemen’s capital Sanaa, others to a nearby inhospitable desert area. Syrian civilians in Idlib receive humanitarian assistance from UN and other agencies based across the border in Turkey. Aid for civilians in Yemen, where need is greater, is insufficient due to Saudi blockade of the ports. This makes the battle for Hodeida existential.

Last week, Emirati forces captured the sections of the highway connecting Hodeida city to the capital, Sanaa, and blocked the main route for supplies for the Houthis who control both main urban centres. The aim of the allies is to compel the Houthis, who refused to attend the UN-brokered talks, to negotiate.

If the Saudis and Emiratis were to capture Hodeida port, they could cut the flow of food and medicine to the Houthi-held north, where the majority of the 28 million Yemenis live. Some 80 per cent of aid and commercial goods for the country enters through Hodeida.

Any halt to imports could lead to famine in the region’s poorest country, where 22 million depend on external aid and 8.4 million people are malnourished and on the brink of starvation.

While western governments have been preoccupied with Idlib, UN agencies have not forgotten Yemen. Humanitarian co-ordinator Lisa Grande said the Yemen crisis had deteriorated “dramatically” since the failure of the peace talks. “Hundreds of thousands of lives hang in the balance [in Hodeida] where families are absolutely terrified by the bombardment, shelling and air strikes.”

“Parties to the conflict are obliged to do absolutely everything possible to protect civilians and civilian infrastructure and ensure people have access to the aid they are entitled to and need to survive,” she said.

The World Food Programme (WFP) warned that shelling and aerial bombing in Hodeida province have targeted aid workers and facilities and called the situation “alarming”. WFP said: “The conflict [is] threatening the continuity of humanitarian assistance to the city and surrounding areas where needs are among the highest in the country.” During August, WFP provided food for 700,000 of the 900,000 residents in the province.

“The conflict has made Yemen a living hell for its children,” said UN children’s agency (Unicef) Yemen representative Meritxell Relano. She said more than 11 million children are threatened by food shortages, disease, displacement and access to essential social services.

“An estimated 1.8 million children are malnourished in the country – nearly 400,000 severely malnourished and they are fighting for their lives every day.”

The Saudi-led war, launched in March 2015, has devastated the country and killed an unknown number of civilians. The UN stopped counting fatalities two years ago. Popular and parliamentary pressure on western governments to halt arms supplies to the Saudis and Emiratis has not disrupted deliveries.