Propaganda rebranded as state publicity as Xi lays down the line 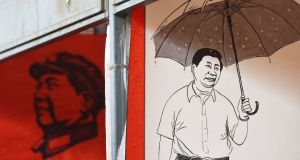 Posters of late communist leader Mao Zedong and President Xi Jinping at a market in Beijing: next step is to bring the China Dream overseas. Photograph: Greg Baker/AFP/Getty

A colourful propaganda poster on a billboard, tucked inside the gate of a leafy residential compound in Beijing’s Chaoyang district, unswervingly promotes a range of key Communist Party policies.

China is an outward-looking and increasingly wealthy and international country, but it can be surprising how much propaganda features in the day-to-day lives of ordinary people.

Much of the publicly posted material is to encourage safety in the workplace, urging people to be a model worker and recognise one’s responsibility to ageing parents. But with Xi keen to nail down his authority – and grumblings over the impact of the trade war with the US, which is hitting the economy and exports to America – the propaganda machine has been dialled up to keep the people on-message.

Propaganda has always been a strength of the Communist Party, and it keeps a tight grip on the state media, the prime means of promoting state authority and communicating the party line. The party used “big-character” posters in universities to kickstart the 10 years of ideological frenzy known as the Cultural Revolution in 1966.

In a school in Yantai in Shandong province, a 13-year-old, middle-school student learns the words of a song about core socialist values. Its parpy trumpet tones make it seem like a 1950s anthem, but it is in fact a recent addition to the Communist Party canon. The song is accompanied by heavily orchestrated dance moves.

Meanwhile, at the corner of a busy intersection in Beijing, at the Landao department store, a giant screen shows a picture of a military pilot getting into a fighter, with the caption “With ability”. The next ad shows People’s Liberation Army infantrymen yelling, captioned “With courage”, followed by a screen showing women soldiers and the line “With integrity”. The final in the series is two tank commanders captioned “With faith”.

Unite more closely around the party centre with Comrade Xi Jinping at the core. Comprehensively strive for the grand victory of socialism

All four messages refer to the 19th Communist Party congress in November, where a key theme was strengthening the military behind Xi.

Shortly before that landmark event, there was an exhibition about the achievements of the Communist Party heavily focused on Xi as a central figure and it installed his philosophy as part of the constitution.

All over the capital are dotted posters quoting a key policy decision from the congress, which removed restrictions on executive power and gave Xi the licence to rule as long as he sees fit.

“Unite more closely around the party centre with Comrade Xi Jinping at the core. Comprehensively strive for the grand victory of socialism with Chinese characteristics in the new era,” they say.

Even in the lobby of a local gym, a stand showing former leaders Mao Zedong, Deng Xiaoping, Jiang Zemin and Hu Jintao, and of course Xi, reminds those heading into the weights room that these are all Chinese leaders who promote sports and physical ability.

Xi has recently been vocal in emphasising how important propaganda is to pass on the message to the people.

There has also been a campaign against what the party sees as crass, such as tattoos, hip-hop and same-sex relationships.

“Reject the vulgar, the base and the kitsch,” said Xi.

There has been a campaign against what the party sees as crass, such as tattoos, hip-hop and same-sex relationships

The Chinese word for propaganda is “xuanchuan”, which is a neutral word but does have negative overtones, so increasingly the government is calling for the use of “publicity” when referring to what comes out of the ministry and officials dislike it when foreign reporters refer to the propaganda ministry.

Elsewhere, a poster hails China’s success in combatting corruption, which has been a key policy since Xi came to power in 2012.

Propaganda always goes hand in hand with its close relative, censorship. Internet controls have also been stepped up, and last year, China closed 128,000 websites that contained obscene or “harmful” information.

Many still get access to forbidden sites such as Google, Twitter or Facebook using virtual private networks (VPN), which allow the user to bypass the Great Firewall of China, as the system of controls is known, but it’s getting harder.

Recent satirical comparisons between Xi and the cartoon character Winnie the Pooh have seen the film Christopher Robin banned in China.

The next step is to bring the China Dream overseas and promote the core socialist idea internationally.

Xi has named his close ally Xu Lin, formerly head of the cyberspace administration, to take charge of the State Council Information Office, which is the party’s international propaganda office.

And Beijing is spending billions on China Global Television Network (CGTN), based in London, which is currently hiring hundreds of journalists as part of a global expansion.