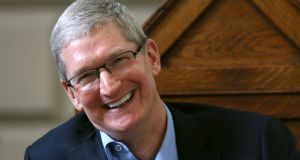 Fake news is “killing people’s minds” and a vast campaign is needed to combat the phenomenon, Apple boss Tim Cook has said.

The chief executive of one of the world’s largest companies said governments should wage information wars against phoney reports while businesses must create the tools to root out propaganda.

False stories have thrived on social media in recent highly-divisive political campaigns, in particular the US presidential election.

In the UK, the Culture, Media and Sport Committee is investigating the scourge over fears it could have a “significant impact” on democracy.

Mr Cook told the Daily Telegraph newspaper a “massive campaign” was needed with a “modern version” of a public service announcement.

“We are going through this period of time right here where unfortunately some of the people that are winning are the people that spend their time trying to get the most clicks, not tell the most truth,” he said.

“All of us technology companies need to create some tools that help diminish the volume of fake news.”

Fake news, which presents falsehoods as being truthful, is often housed on websites masquerading as media outlets.