Another 240 whales swim aground at New Zealand beach

Volunteers had rushed to save some of 416 whales found on Friday, many already dead 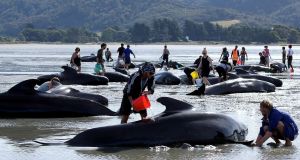 Volunteers try to assist some more stranded pilot whales which came to shore the day after after one of the country’s largest recorded mass whale strandings, in Golden Bay, at the top of New Zealand’s South Island, February 11th, 2017. Photograph: Anthony Phelps/Reuters 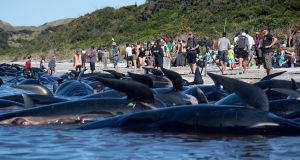 Dead pilot whales sit on the high tide line during a mass stranding at Farewell Spit, New Zealand, on February 11th, 2017. More than 400 whales had already been stranded on same stretch of beach on February 10th, with most of them dying quickly as frustrated volunteers desperately raced to save as many as they could. Photograph: Marty Melville/AFP/Getty Images

A new pod of 240 whales has swum aground at a remote New Zealand beach hours after volunteers refloated a different group following a mass stranding.

In total, more than 650 pilot whales have beached along a 5km (3 mile) stretch of coastline over two days on Farewell Spit, at the tip of the South Island.

Department of Conservation Golden Bay operations manager Andrew Lamason said rescuers are sure this is a new pod because they had tagged all the refloated whales from the first group.

The news was devastating for hundreds of volunteers who came from around the country to help with the initial group of 416 stranded whales that was found early on Friday, many of them already dead.

Volunteers are planning to return on Sunday to help refloat as many healthy whales as they can.

Mr Lamason said about 20 of the new group were put down by conservation workers because they were in poor condition and more would likely need to be treated that way.

Rescuers had been hopeful earlier on Saturday after efforts to refloat the initial group of whales had gone well, following a frustrating day on Friday.

He said about 100 surviving whales from the initial group were refloated, and dozens of volunteers formed a human chain in the water to prevent them from beaching again.

He said volunteers were warned about the possibility of stingrays and sharks, after one of the dead whales appeared to have bite marks consistent with a shark. He said there had been no shark sightings.

Officials will soon need to turn to the grim task of disposing of hundreds of carcasses.

Mr Lamason said one option was to tether the carcasses to stakes or a boat in the shallow tidal waters and let them decompose.

The problem with towing them out to sea or leaving them was that they could become gaseous and buoyant, and end up causing problems by floating into populated bays.

Farewell Spit, a sliver of sand that arches into the Tasman Sea, has been the site of previous mass strandings.

Sometimes described as a whale trap, the spit’s long coastline and gently sloping beaches seem to make it difficult for whales to navigate away once they get close.

New Zealand has one of the highest rates of whale strandings in the world, and Friday’s event was the country’s third-biggest in recorded history.