‘The Handmaid’s Tale’, about women forced to bear children, is shooting back up bestseller lists 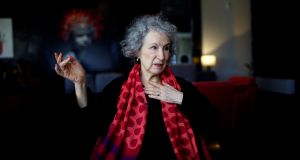 Canadian writer Margaret Atwood speaks during an interview at a hotel in Havana, Cuba on Wednesday. Photograph: Reuters

Canada’s best-known writer Margaret Atwood said it was largely worries about women’s issues after the US election that made her book The Handmaid’s Tale the latest dystopian novel to shoot back up bestseller lists.

The book, about a theocratic dictatorship in the United States where women are forced to bear children for the ruling class, topped Amazon’s best seller list earlier this week, and still ranks in the top ten.

In an interview during Cuba’s international book fair, where Canada is guest of honor, Atwood said sales of The Handmaid’s Tale were also boosted by a trailer during the Super Bowl for its new televised adaptation by video streaming site Hulu.

“When it first came out it was viewed as being farfetched,” the 77-year old grande dame of Canadian literature said of her novel that was originally published in 1985.

“However when I wrote it I was making sure I wasn’t putting anything into it that human beings had not already done somewhere at sometime.”

Atwood, a prolific writer who won the Booker Prize in 2000 for The Blind Assassin, said The Handmaid’s Tale was inspired by her studies of 17th century America and its Puritan values.

“You are seeing a bubbling up of it now,” she said, referring in particular to moves under US president Donald Trump to restrict the right to abortion. Trump said last year women should face punishment if they receive abortions.

“It’s back to 17th century puritan values of new England at that time in which women were pretty low on the hierarchy”.

The first person narrator of The Handmaid’s Tale tries to escape to Canada. Some have already taken refuge there since Trump’s election, Atwood said, adding that it had historically been seen as a place of relative safety.

In the TV adaptation that debuts in April and features Mad Men star Elisabeth Moss, Atwood plays a cameo role.

The classic book features an authoritarian government that spies on its citizens and forces them into “doublethink,” or simultaneously accepting contradictory versions of the truth.

“We think as progress being a straight line forever upwards,” said Atwood. “But it never has been so, you can think you are being a liberal democracy but then bang you’re Hitler’s Germany, that can happen very suddenly”

Cuba and Canada were alike in that they were small countries that both keenly felt the impact of international politics, said the author, who has made regular trips to the Caribbean island since a first cultural exchange in the 1980s.

Birdwatching was one of the activities that kept her, and her partner and writer Graeme Gibson, coming back.

Several new editions of her books are being presented at the Cuba book fair, which runs until February 19th and in which nearly 50 countries are participating.