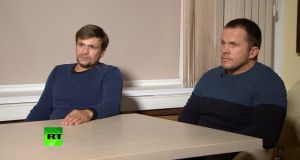 A still image taken from video footage and released by RT news channel, shows Alexander Petrov and Ruslan Boshirov during an interview, on Thursday, at an unidentified location in Russia.

Two men identified by the UK as prime suspects in the poisoning of a former Russian spy in Salisbury came forward on Russian television on Thursday in an attempt to clear their names, insisting they were merely tourists.

Alexander Petrov and Ruslan Boshirov told the state-controlled RT television network (formerly known as Russia Today) they were on a sightseeing trip to Salisbury on March 4th but had no hand in the attempted assassination of Sergei Skripal and his daughter Yulia that took place that day.

“Our friends had been suggesting for a long time that we visit this wonderful town,” Mr Petrov said.

The two men also denied UK claims that they were Russian military intelligence agents and said publicity surrounding the allegations had turned their lives upside down.

UK prosecutors said last week they had sufficient evidence to charge Mr Petrov and Mr Boshirov, who travelled from Moscow to London on March 2nd on Russian passports.

Police say the two hitmen smeared the deadly nerve agent Novichok on the front door of the Skripals’ home in Salisbury, Wiltshire, on March 4th before returning to London to board a flight for Moscow.

The Kremlin has vigorously denied it was behind the Skripals’ poisoning and claims the UK had fabricated the evidence to undermine Russia’s reputation.

President Vladimir Putin urged Mr Petrov and Mr Bashirov to come forward on Wednesday after the UK released videos captured on security cameras of the two men walking in Salisbury in early March. “There is nothing criminal about them,” Mr Putin said at an economic conference in the Russian Pacific port of Vladivostok.

In an interview with RT’s editor-in-chief, Margarita Simonyan, Mr Petrov and Mr Boshirov confirmed they were the men shown in the UK’s CCTV pictures but declined to show their passports to the camera. Denying allegations that they worked for the GRU, the Russian military intelligence agency, they said they ran a business supplying importing fitness nutrition.

Mr Petrov said it was “just a fantastic, fatal coincidence” that he and Mr Boshirov had happened to be on a brief sightseeing trip to Salisbury at the time the Skripals were poisoned.

Describing the visit, the two men said they had planned on the advice of friends to see the city’s famous cathedral, but had been deterred by bad weather – as had also happened when they made a brief visit to Salisbury the day before.

Snow and slush spoilt their tour of the nearby Stonehenge prehistoric monument and they had returned to Salisbury for a few hours before boarding a train for London.

Asked if they had been anywhere near the Skripals’ house, the suspected assassins said they had no idea where the former Russian spy lived. “Maybe we passed it by, maybe we didn’t pass it by . . . I didn’t know anything about them before this situation, this nightmare with us started,” Mr Boshirov said.

Their interviewer did not ask them to account for Novichok traces which British police said were found in their hotel room.

The UK rejected the RT interview as a sham.

“We have repeatedly asked Russia to account for what happened in Salisbury in March. Today – just as we have seen throughout – they have responded with obfuscation and lies,” said a government spokeswoman.

John Glen, Conservative MP for Salisbury, said the two suspects’ statements were “not credible and don’t match the widely accepted intelligence we have on these individuals”.