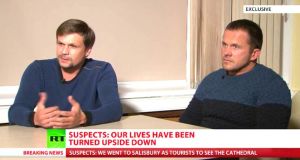 Men claiming to be Russian nationals Ruslan Boshirov (left) and Alexander Petrov, the two suspects in the poisoning of an ex-Russian spy Sergei Skripal and his daughter Yulia, appearing in an interview on the Russian state TV channel RT. Photograph: RT/PA Wire

Two Russians appeared on state television on Thursday, saying they had been wrongly accused by Britain of trying to murder a former Russian spy and his daughter in England and had been visiting Salisbury in March for tourism.

British prosecutors last week identified two Russians they said were operating under aliases – Alexander Petrov and Ruslan Boshirov – whom they accused of trying to poison Sergei and Yulia Skripal with a military-grade nerve agent in England.

The two men who appeared on Russia’s state-funded RT television station had some physical similarities to the men shown in British police images.

“Our friends had been suggesting for a long time that we visit this wonderful town,” one of the men said of the English town of Salisbury in a short clip of the interview played by RT.

They said they may have approached Sergei Skripal’s house by chance but did not know where it was located. They had stayed less than hour in Salisbury, they said, because of bad weather.

Britain has said the two suspects were Russian military intelligence officers almost certainly acting on orders from high up in the Russian state. Russia has repeatedly denied any involvement in the case.

Mr Skripal – a former Russian military intelligence colonel who betrayed dozens of agents to Britain’s MI6 foreign intelligence service – and his daughter were found slumped unconscious on a bench in the English city of Salisbury in March. They spent weeks in hospital before being discharged.

The two men said they did not work for GRU, were ordinary businessmen, and the victim of what they called “a fantastical coincidence”.

The duo surfaced a day after President Vladimir Putin said Russia had located Mr Petrov and Mr Boshirov, but that there was nothing special or criminal about them. He expressed hope they would come forward and speak publicly.

The affair returned to the headlines in July when a woman near Salisbury, Dawn Sturgess, died and her partner Charlie Rowley fell ill after Mr Rowley found a counterfeit bottle of Nina Ricci perfume containing the Novichok nerve agent and brought it home. – Reuters